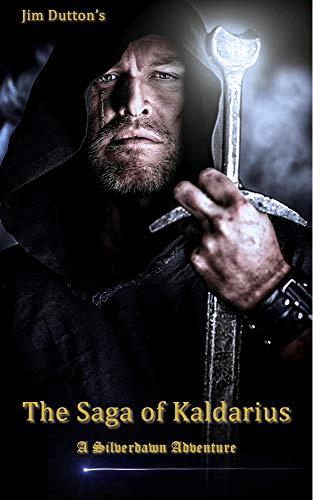 Herein are the adventures of Kaldarius the Mage, at first a young adventurer beginning to seek his fortune, and moving through a career facing increasingly complex missions and dangers. These adventures come from a game called Silverdawn, created in 1981. The game ran for most of the 1980s.

Offering heroic fantasy adventures, the game was unique in offering interactive fiction between players and game masters. The game quickly grew to include thousands of players from around the world.

To mark its first anniversary, an interesting adventure from one of the players was published as a booklet, with the abridged contents of the first 20 or so moves.

This book contains the complete moves from the player, and the game master’s created adventures in response. Plus, it goes beyond the first years’ worth of moves originally published -- to include all the adventures experienced through the mage, Kaldarius, plus a bonus -- new chapters in the adventure written in 2019 to finish out the last quest of Kaldarius.

Additionally, notes from the game master have been added to explore his thoughts, both at the time and in looking back from decades later.

So this is a very different heroic fantasy book, as it was played as a game, and the prose is a collaborative effort between the player and the game master.

I hope you enjoy it!