Senior Member
I wanted to generate a 'pedestrian romance-story' that offered up an 'antidote' to the usual/customary conversational and colloquial term 'game' (which we use rather liberally in referring to the love/mind interplay between lovers that so often occurs without sincerity or harmless humor).

In this original fictional work, a lacklustre princely heir (an American 'idiot son') realizes he's in love with a female lab boss at his science-internship during his college years and considers how to 'woo' her without seeming like he's simply 'playing a game' to just grab yet another 'society trophy.'

I've drawn inspiration for this short-story (approx. 900 words) from the life-experiment film The Secret of My Success, and I'd love any feedback regarding the psychological-cogency of this tale.

Ajay was a consummate slacker. He was in his third year at a prestigious Ivy League school, which he managed to gain admission into because of his distinguished family lineage. Ajay was the penultimate 'idiot son' prepared to simply bask in the comforts of family-inheritance. However, Ajay knew he had to complete his Cognitive Science degree/education at his prestigious and demanding college, and his GPA was not very good, which is why he took up a special internship at a Neuropsychology Experiment lab while on an exchange-study program during his junior year(!). Ajay came into the lab everyday at 10am (which is when he was supposed to clock-in) and worked at his station as a lab-tech and research-assistant (intern!). He'd sometimes have to go to some office or science equipment supply store to pick up materials for his lab bosses.

Ajay had one lab boss, a very gorgeous and brilliant paediatric neuropsychologist named Edie Prichard who simply wanted to be referred to in the lab as 'EP.' Ajay had become infatuated with EP, especially since she was recently divorced from her husband. She was only 3 years his senior, having graduated from Harvard and then joining the lab as an advanced scientist in the field thanks to her very well-praised neuroscience thesis. EP was everything Ajay was not --- diligent, self-organized, ambitious, and mature. Ajay was completely head-over-heels in love with EP, but he knew she held a quiet disapproval of Ajay's person, given his lazy aura, slacker-mentality, and somewhat lack of reverence for the science field which she held so dear. This did not deter Ajay, however, from earnestly seeking to win EP's affections.

Ajay wondered what he should (or could) do to win EP's heart. He decided he's start coming into the lab with a clean-shaven face and washed/kempt hair and ironed shirts and handsome slacks. He wouldn't wear a tie, however, goodness, no. Ajay mustered what he could do to actually 'prove' to EP that he just might be the sensible and aspiring young man (college student) worthy enough to win EP's affections. After all, he wasn't a minor or anything, so he could even take her out to dinner and order wine (legally!). However, Ajay knew EP was no 'bimbo' to just win over and was determined to find ways to make her think he was a great guy to accept an offer of courtship/romance. Ajay came up with an ingenious and delicious scheme --- he'd walk by her office everyday in the lab and compliment her on her clothing.

"Even if she's wearing something very drab or perhaps even plain, I'll say something nice or sweet about her dress/clothing!" Ajay thought.

Ajay did just that; he walked by her office everyday and peered in with his head (since her door was always open!) and said some kind or sweet or charming word regarding her pleasant, impressive, stylish, or appealing dress or clothing or sense of fashion. Everyday, EP would turn to Ajay and simply thank him (again) for his kind courtesy and compliment (before nudging him to get back to work in the lab!). Ajay did this for a whole month, and now he had only 2 more months before having to return to his college since his exchange-study program/internship was near its end(!). Ajay resolved to write EP one nice and thorough courtship letter in his last week working at the lab. In the letter, he'd disclose to EP his prestigious family lineage and wealthy inheritance and ask her to consider calling him (once he'd graduated!) if she was drawn to the notion of marrying/loving a 'wealthy American prince.'

"Everyday, EP, I walked by your office and complimented you on your dress/clothing. I myself consciously dressed very professionally and worked very diligently in the lab to win your approval. I knew you reasoned (rather correctly!) that I was a consummate slacker and did not exhibit the appropriate respect/reverence for the science filed in which you stood out brilliantly(!). I fell in love with you. You're brilliant, bold, beautiful, and b. You make me feel innocent...and young. That's why I wrote this final farewell letter with a disclosed proposition of courtship/love. I'll be going back to college for my final/senior year and after I graduate, I hope you'll consider calling me (my phone number is included in this letter!). I want you to know now that I'm a princely heir to a prestigious family/fortune and will basically become an 'American prince' someday. I was humbly wondering if that appealed to you and if my 'reformed mannerisms' likened me to you (in your sincere estimations!); perhaps my money could be beneficial for some science grant/endowment for your field/lab/work. Whatever you're thinking, I want you to know that you've changed me. I've also enclosed in this 'love-letter' my colour-pencil stick-figure doodle of a sardonic adversarial 'alter-ego' demon which has plagued my consciousness and lured me towards laziness and self-indulgence. EP (Edie), if you see an earnest soul with true romantic intentions beyond this 'Satanic clown' I've drawn as a sarcastic self-portrait, I sincerely hope you'll consider calling me..." 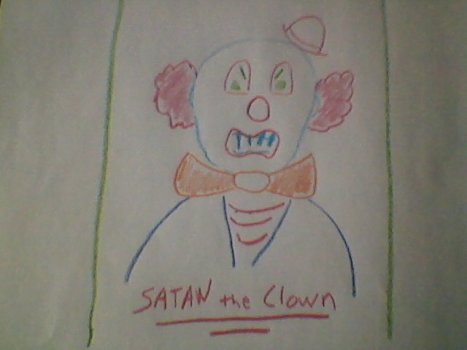 Senior Member
Quick clerical/content correction --- in the final portion of the story (Ajay's love-letter), about 5 sentences down, when Ajay writes "You're brilliant, bold, beautiful, and b.", I forgot to fill in what that last b-word/compliment would be.

I originally wanted to leave it just as 'b' to imply Ajay was making a joke, but upon reflection, I just want that last b-word to be an actual/praising word, so consider me amending that line to complete the sentence, "...brilliant, bold, beautiful, and bicameral."

Yes, that magic word is 'bicameral.'

This is a different work-up of the same concept of a boy/man seeking to 'entreat' an attractive girl/woman with some type of communique-experience...or game!

Ajay graduated well from Cornell with an education in hospitality management, tourism, and the culinary arts. He would begin work that autumn after his June graduation. Ajay took up an exciting position as a hotel restaurant manager and room service supervisor, a high level position afforded to him by his quality degree from Cornell, a prestigious Ivy League school. He was 22 and eager to begin work at the Courtyard Marriott hotel in Lowell, Massachusetts. When Ajay arrived at the Courtyard, he was impressed by the hotel's appearance, upkeep, and personnel.

AJAY: I look forward to being a true asset to the Courtyard, sir!
HOTEL MANAGER: Your Ivy League degree makes you a promising professional.

Ajay began working at the Courtyard that August, and he arrived 30 minutes early to work every morning, at about 7:30 a.m. His boss and co-workers were impressed by his overall gusto and fine attention to detail and were sure they'd found an excellent new staff member at their excellent hotel. Ajay began supervising on matters at the Courtyard regarding food supplies ordering, room service policies and procedures, and guest accommodations fine-tuning. Ajay was happy.

Just two months later, Ajay learned that the Courtyard would receive as a VIP guest-group the visiting Houston Astros MLB team preparing to face the local Boston Red Sox in a thrilling playoff Series. Ajay wanted everything to go perfectly, since he was an avid baseball fan and wanted the Courtyard to become an MLB favorite of visiting teams preparing to play the Red Sox. Ajay began working and preparing for the Astros visit harder than he'd ever worked before!

When the Astros arrived, Ajay got a real life curveball. A female Astros team executive named Kay Parot arrived with the Astros on the team bus to the Courtyard. Kay, a beautiful brunette who dressed stylishly but not arrogantly, instantly caught Ajay's eye. Ajay realized she was around his age and hence probably intelligent and hard-working like him, since she'd obtained an executive position with the Astros at a relatively young age --- Ajay guessed she'd be only 23 or 24.

AJAY: I was welcoming/greeting your team and had to meet you...
KAY: I'm not in the market for romance; I just want to see my team win.
AJAY: Are you dating/married?
KAY: No, I'm single but not necessarily 'looking.'
AJAY: My name's Ajay; at least tell me yours!
KAY: I'm Kay, and I graduated from Yale (I'm 24).
AJAY: I graduated from Cornell; I'm 22!
KAY: Well, Ajay, I think our 'Ivy League connection' is limited...
AJAY: Look, take my business-card and consider calling me, Kay.

Kay smiled and accepted the business-card, which had Ajay's phone number printed on it. She proceeded to check-in to her room at the Courtyard, and Ajay gave her one extra long yearning look. Ajay turned to his friend, the elevator-man (Steve) and told him he was head-over-heels. Steve laughed and reminded his friend to focus on the job --- hosting the Astros at the hotel. That night, Ajay wrote a love-letter proposition to Kay. He intended to give it to her the next day, and if she changed her mind, he'd become an Astros fan...

I studied at Cornell very hard so I could attain my American Dream. I feverishly worked at the Courtyard to prepare for the Astros' exciting visit, but when I saw you, all I could dream about was meeting you. You've hypnotized me, and that's why I'm wondering if you'll let me escort you to Game 1 of the Astros-Sox series at Fenway Park in Boston this Friday. I don't want to keep working at the Courtyard thinking that I let a visitor like you just pass me by, because I'm just too darn youthful for that! Won't you let me become your love-story...if this letter about life pleases the woman in you? I'm eager to become an Astros fan...and your Ivy League boy." 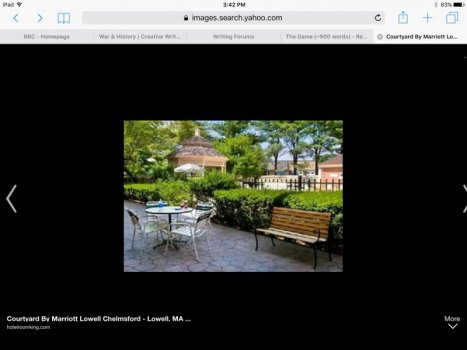