wOw, Sigs. The book is quite the beast. Splitting it into several books sounds a good idea.

​
Fingers crossed I can get some writing done in between packing and clearing the house ready for our holiday.

Added a whole chapter of God the Father flashback, plus tidied up and finished several more.


Foxee said:
Well, one thing is that he's not my telepath. LOL
Click to expand...

If it's any comfort concerning your bad guy checking out ladies ala Sir Mix A Lot, I'm leaving off for the night on this note:

Damn. Infusing the room with the smell of key lime pie and something akin to watermelon candy, Ashling turned around on his stool enough to smirk at us over his shoulder. Bo, have I told you that I love it when you’re sassy?

Oh, but how much do you like it when I’m sassy? we said, a very flirty smirk on our face. Because I can be sassier.

And then we beheld the great panty-dropping smile—and if Georgie hadn’t been in our lap, I was certain Bo would’ve dropped his pretty pink panties—

They’re not panties, David; they’re more spacious than panties. We aren’t some nutless wonder; our coconut candy mound has almond joys—unlike somebody we know—

No, Bo, I said. They’re big enough that Elena thought they were an extra set of kidneys.
Click to expand...

Now at 42904. Hopefully can keep going while I'm on holiday.
Good luck everyone - keep going!

Probably should've continued on with--oh, I don't know--the present plot?! but, of course, I didn't, being that I'm somewhat in the God the Father vibe and able to juggle shizznit around later.

Wore myself out discussing really, really emotionally draining stuff on the NaNo forum, so even once the migraine had dimmed, I was just not in the write headspace to be working on the WIP. Needed to work on something lighter to save my sanity (even a little) but I just could not get out of the funk. Wrote 2739 worth of trauma discussion (tried to explain the victim's struggle after rape/child abuse for a blessedly normal person). Feel so wiped, but I at least wrote a lot--it just wasn't on the WIP. Then I followed it up by a big bunch of funk discussion with my darling husband and got us both in a funk. 'Cause I'm a terrible person who just has to ruin everyone's Friday night.

This is the slog for sure. Kids have been down one after the other with flu. I have been running to the BR all day and tried to sleep it off between that. Just getting any words every day is a win.

I only managed to write around 1000 words while travelling. Although Nano has become an itch I need to scratch I have managed to resist while playing with grandkids.

However, said count includes project-related notes and scenes which will be moved elsewhere, deleted, etc. so the word count's going to go down after NaNo by quite a bit. I normally keep the beast tidier and prune off notes as I finish up said parts related to the notes; I also don't keep scenes I've hacked out on the tail end normally. Written a ton of NaNo-countable scenes only to decide I don't want them in just yet (or possibly ever, in some cases).

Patron
My little point-graph on the NaNo site has flatlined for several days. I mean, more days than not I added a negligible amount just to try to get my goal of writing everyday but no serious wordage. Today I did manage a couple of writing sprints. Plus some voice-to-text that I did on my phone, just thinking things through, that I did while waiting for my mom to meet me to hand my kids back.

which means I need to write 4000 words by tomorrow night!​

Finally! Now I can relax and focus on writing crap poetry 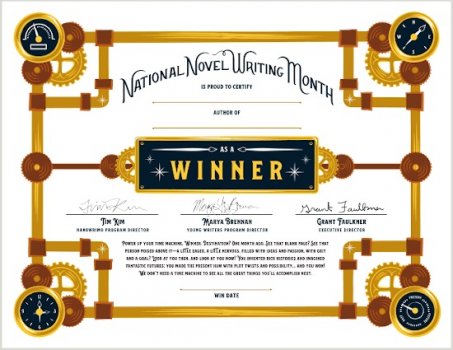 Congratulations, PiP
Looking forward to a crapload of poetry

Made it to 56K total... still not done with the beastie, which is 271K and counting (even after I took all the extra notes and "deleted scenes" and such out).

seigfried007 said:
Made it to 56K total... still not done with the beastie, which is 271K and counting (even after I took all the extra notes and "deleted scenes" and such out).
Click to expand...

Well done, seigfried! I don't envy your task of editing the beastie I am nowhere near finished my beast but I'm now wondering do I still continue to write using SOC and just lay down the bones of the story or do take a more organised approach?