Literary Maneuvers for July 2021: It Should be Over by Now (1 Viewer)

Introducing
Literary Maneuvers Competition
for July 2021
The prompt is “It Should be Over by Now.” 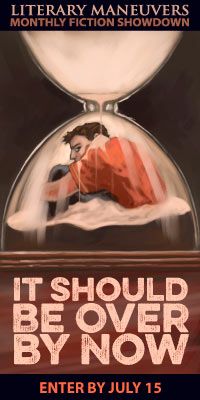 The stories you submit for the

must adhere to 650 words,
not including the title.

Here are THE RULES

Critiques from
Judges due to
SueC

(please and thank you)
No later than Friday, July 30th

Introduction to the Competition

Pick your own title, write about whatever you want,
as long as it relates to the prompt in some determinable way.

you'll get a badge pinned to your profile
plus an invitation to submit
a story for our annual
Grand Fiction Challenge
Which carries cash prizes. Pretty neat, eh?

If you wish to know more about scoring,
take a look at the NEW JUDGING GUIDE
which also includes a template to use for your scoring.
Please use this template for consistency.

Additional Info
​
TO ENTER the JULY LM COMPETITION:
There are three ways to post your entry

* Cut and paste your story here in this thread. It will be visible to the public and considered “published.” This you can do yourself.

***Note: If you do post it in the Challenge Workshop, you must post a link
to it here in this thread, otherwise your story may not be read or counted.

For anyone new to this process
and needing some guidance,
please PM me (SueC).


Everyone is welcome to participate, including judges.
A judge's entry will receive a review by their fellow judges,
but it will not receive a score, though some judges are
happy to let you know their score for you privately.

Please refrain from reacting to an
entry until the scores are posted.

Thank you and have fun!


Judges: In the tradition of LM competitions of yore, if you could send the scores no later than July 30th, it will ensure a timely release of results. Much later than that and I will have to post what I have. Again, please see the Judging Guidelines if you have questions. Following the suggested formatting will be much appreciated, too.

Please note any time differences where you
are and be mindful of daylight savings time.​
Last edited by a moderator: Jul 1, 2021

Not real rain, of course - nobody had felt that in years, since the Institute commemorated their 150th anniversary by surrounding their capital in an impenetrable, protective dome. Water from underground streams sufficed for growing food. But for the common citizen, in need of at least the illusion of nature, this had to do.

Maya. A simulation, the world and history at one's fingertips, so real the real world seemed an illusion.

Adam looked at the dying body at his feet with detached amusement. The alleyway was empty but for them, his blood trickling into the gutter. The stench of faeces reached Adam's nostrils, so real he started to retch.

The victim had shit himself. His own fault for giving Adam the evil eye in the tavern.

Adam closed his eyes, a familiar tingling spreading across his body as the equipment disengaged. Session was over. Back to the grind, engineer at the Communicatorium, ensuring the Institute's data was transmitted flawlessly and unseen except by those who truly needed to know. Plus weekly ultraviolence at the Colosseum, an abundance of drugs, and of course Maya. Life was good. Life was -

"Hm," said Adam. "It should be over by now." He opened his eyes; he was still in the alleyway. The tingling remained, only different somehow. Before, it had felt like thousands of tiny pinpricks spreading across his body, part of the suit that provided total immersion in this world. Now, it was like those pins had penetrated and never left.

He looked around. The rain had frozen, hanging suspended between heaven and earth. The body continued to bleed, yet that too was motionless, the man's slow, agonised death suddenly paused.

"Fuck," said Adam. "System crash." Not uncommon, at least in the early days of Maya. In recent years they were rare; the introduction of the offence of "criminal glitchcraft" had a startling effect on the quality of the City's bug testing.

"Not exactly," came a voice from behind.

Adam jumped, turned. Behind him stood a single figure. They were of indeterminate gender, but clearly great age, face marked by wrinkles and scars. They wore a robe split vertically between red and black, a golden apple where the two halves met. Their eyes were grey, filled with quiet intensity.

"Who the fuck are you?" asked Adam.

"Language." The figure tutted. "My poor innocent ears. You may call me Discordia."

"Well, Discordia. What the fuck do you want?"

Discordia rolled their eyes. "I have a task."

Adam looked around. "Is this a sidequest? I need to get to -"

Adam gestured to Discordia to continue.

"Maya is housed on multiple servers all around the City. Often, these servers have other purposes - intelligence, the prisons, the records of the Palace. This data is my goal. Yet were I to do it directly, I would be detected in a heartbeat.

"I have edited your avatar's code, embedded a routine which will send me data from the servers hosting the part of the simulation you are visiting. Your job is simply to visit the relevant places."

"I will kill you," replied Discordia. Adam felt the pinpricks on his body grow stronger, ever more painful, a stinging, burning pain on every inch of his flesh.

Discordia nodded. The pain subsided. "You see my point."

"I can deal with that," cut in Discordia. "So far as the record shows, you were visiting one of theI w brothels of Pompeii and lost track of time."

Discordia shrugged. "You help me, the Institute might kill you. You don't help me, I will definitely kill you."

Adam tilted his head, weighed up his options. "You know what? Let's do it."