Life in the slow lane (2 Viewers)

WF Veterans
This is really intended for the [strike]drones[/strike] folks in cubes in the middle of office buildings.... No, they may not even have windows.

LeeC said:
Knowledge is knowing that tomatoes are a fruit. Wisdom is knowing not to put them in a fruit salad.
Click to expand...

Chutzpah is calling that fruit salad "artisan salsa" and selling it for $6/jar.

astroannie said:
This is really intended for the [strike]drones[/strike] folks in cubes in the middle of office buildings.... No, they may not even have windows.
Click to expand...

Been there, but still went outside every chance I got. There was a sign I left on my desk, "I'm in my other office."


astroannie said:
Chutzpah is calling that fruit salad "artisan salsa" and selling it for $6/jar.
Click to expand...

My idea of salsa is serrano peppers, with tomatillos, onions, garlic, and basil, which I make myself. Liberally spread on my morning huevos rancheros, it keeps my blood flowing

WF Veterans
Ran across this, and thought how true it is if one has had enough life to realize.


“One of the things that draws writers to writing is that they can get things right that they got wrong in real life.” ~ Tobias Wolff

WF Veterans
Yeah, making villains of former bosses and various co-workers I didn't like is fun as hell. Even knocked off a few in print (of course, they wouldn't have recognized themselves). I realize now if I had just kissed a few (bleep) I would have gotten more promotions. Oh well. A lot of them got their comeuppance when the company downsized, then sold out to the highest bidder.

WF Veterans
On being thrifty and cautious. My old iMac got to the point where it wouldn't even boot up before I had a chance to wipe the disk. I didn't want to take the chance of identity theft, or whatever, so I inquired at the Genius Bar and one other outfit about having the disk wiped and recycling the iMac. They both wanted a tidy sum, so I pulled the hard drive out of the iMac (a tricky task) and drilled it so full of holes that no one will get anything off it. Then I packed up the parts and took it to our local "Transfer Station" (recycling center) where they charged me only $5 to accept it.

On another note, the following is a social media post I just started putting up.

Will our children be able to say the same?
[David Attenborough's What A wonderful World]
https://youtu.be/auSo1MyWf8g


** I can never get the BB code right to embed the video.

WF Veterans
Lee...How wonderful this world is depends entirely upon where you are on the food chain. More are at the bottom. Real wealth is now in the hands of a few.
I read the (non-political) book, Coming Apart in America, a couple of years ago. It foresaw this dangerous mess coming. The planet has come apart.

WF Veterans
Done so many things wrong and trampled on so many feet in my three quarters of a century, that I’m grateful for what I have, especially those that have stuck by my side. The wife being within weeks of retirement, and our watching expenses more, I was genuinely surprised today when she came home with an early birthday present.

I’ve mentioned before that lightening took out a utility pole across the road, and our old iMac started dying soon after. To replace it I sold a few things and got a new 15” MacBook Pro that could handle not only my writing, but the more demanding illustration work I’m doing for my book. I wanted a laptop so I could easily use it in the hospital also, and the MacBook has all the power I need, but even the 15” screen is tiring when I’m working at my desk.

Anyway, the present the wife got me is a 27” LG HDMI display. I simply plugged it into my MacBook and presto I had a a much larger additional display. [MacOS is plug and play, not needing additional drivers and fooling around like some other OSs]

In the pic below you can see the relative size, though the screen image is a little washed and bluish because of the brightness of the display. The additional bluetooth keyboard I salvaged from the iMac. The app that’s running is GIMP, that I use for my illustration work. That’s a gray wolf, not blue, that I’m working on at the moment.

I think what amazes me in part is the capacity and power of the MacBook. The first computer I worked on was an IBM 1130, with 16K (16 bit words) hardwired ferrite core memory, and a large pizza sized 512K disk. It took up more space than my desk does now. Oh, and the little black object behind my MacBook is a 500 gigabyte SS disk that Time Machine on the MacBook uses for automatic incremental backups.

By the way, my bedroom/office is the in the marryin’ and buryin’ room of this 1780’s farmhouse ;-)

Maybe the moral is, be thankful for what you’ve got and maybe more will follow 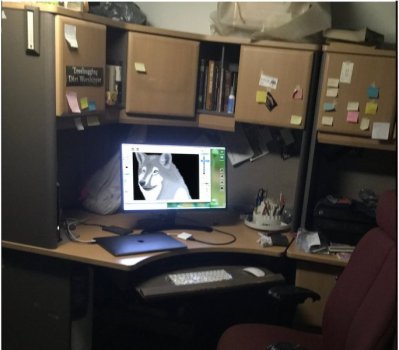 WF Veterans
Business insider magazine has a story that the gall -darn'd m'lenials are putting mom & pop Applebee's, TGIF, and other assorted 'sit-down experience ' ilk outta business by going with different options. How is poor Mrs. Applebee's going to afford all those kids, and that dog, and that old shoe or boot or whatever she was living in?! Bare cupboards i tell ya. Dang it.

Kevin said:
Business insider magazine has a story that the gall -darn'd m'lenials are putting mom & pop Applebee's, TGIF, and other assorted 'sit-down experience ' ilk outta business by going with different options. How is poor Mrs. Applebee's going to afford all those kids, and that dog, and that old shoe or boot or whatever she was living in?! Bare cupboards i tell ya. Dang it.
Click to expand...

Gasp
Anybody care to translate ??

bobo said:
Gasp
Anybody care to translate ??
Click to expand...

Basically, these chains have been around forever, have failed to recreate themselves (in a phrase, they suck) and are being replaced by new chains and restaurants with a more eclectic combination of food selections that cater to adventurous tastebuds. =p

bobo said:
Gasp
Anybody care to translate ??
Click to expand...

well... I read this article bemoaning the decline of what over here has
standard business model : the industrial sit down food chain restaurant. I listed some the names but I understand if you never heard of them. Over here they are everywhere ( unless you're somewhere very rural). Why post this here? Well, this an age related thread, being generally geared toward the more aged,and in contrast to the younger crowd, and the general gist of this article was that the reason for this decline in the American standby was that younger people, the Millenials, were not patrons. The article could very easily be taken as a criticism of their eating habits.

Anyway... So Applebee's is one of the restauants. The name itself I think is a piece brilliant marketing , at least it was, sort of bringing to mind homey, home cooked food, which they don't sell. Its corporate,and it's s chain. I don't personally care for the food, but, it definitely was a success; was. I was sort of making a joke about poor Mrs Applebee', and whatever will she do? I don't know if there ever was an Applebee person but if there was they must be very wealthy, and not a very good cook, or someone just got the/came up with the name. I was hoping to sort of elicit old mother Hubbard, which was a traditional nursery rhyme back when.
Last edited: Jun 6, 2017

WF Veterans
Some things not to say. The wife and I have long since entered that stage where there is only trust and friendship to rely on, or if you romantics insist, non-physical love. We're very different personality types so things are generally lively. Unless you have a very solid relationship, don't mimic this conversation snippet we had today.

The wife is always trying to get me moving doing something or other**. When I'm tired or have other things to do, at first I often don't hear, but when she persists I answer, "Yes dear."

After she's heard enough "Yes dears" in a day, she sometimes gets a little more vocal.

Wore out today from trying to do a few chores, I replied, "Ladies and gentlemen, with no apologies I present Donna Rickles."


** She means well, actually trying to keep my blood circulating.

On another note, I noticed this collage of news clippings today. Seems to me these "journalists" would have learned more interacting on WF than from whatever college they went to. 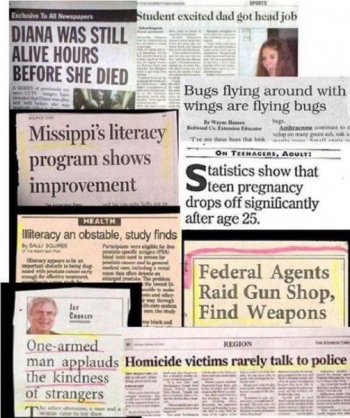 Kevin said:
well... I read this article bemoaning the decline of what over here has ...
..... but if there was they must be very wealthy, and not a very good cook, or someone just got the/came up with the name. I was hopping to sort of elicit old mother Hubbard, which was a traditional nursery rhyme back when.
Click to expand...

Whou, no I even understand the short, coded version !!
- good the chain is broken, food should be eatable :topsy_turvy:

WF Veterans
If your wife has her own career, try to get her interested in numerous other things before she retires. For most of my wife's career she managed major implementation projects for a large corporation. Now that she's retired, aside from golf I'm the only "project" she has to manage.

WF Veterans
I am reminded of a sheep dog without a flock. I say! Since she's so good at things...Perhaps you could get her to work on procuring you a single occupant mini off-road vehicle... sort of an 'escape pod'.http://www.actiontrackchair.com/Default.aspx#.WTlRYsRHanM

WF Veterans
Great idea Kev I put one on my list for when I win the lottery. That way I could get out in the woods when the "sports" hunters come around, to throw firecrackers to scare off the wild turkeys, grouse, bears, and deer.

WF Veterans
I don't know if this will count, but maybe I can get away with being young and connecting with this experience. For the first time ever today on my lunch break I discovered the TV show Bonanza. The seasons are on Hulu and I'm going to watch every single episode. I'm quite excited about it. I have a feeling at least one of you will have recalled a time watching this show ^_^