In The Shadow Of Sandia (1 Viewer)

Senior Member
The sign was hand lettered and nailed to a pole near the road. It read, "Lost. Two Golden Retrievers." At the bottom was the name and phone number of the owners. It was basically your run of the mill Lost Dog poster but this was Albuquerque, the foothills of the mountains of New Mexico, a place where bears and mountain lions are known to take off with their share of domestic cats and dogs. For these two lost dogs, there was a pretty fair chance that they'd fallen prey to wilder beasts than themselves. 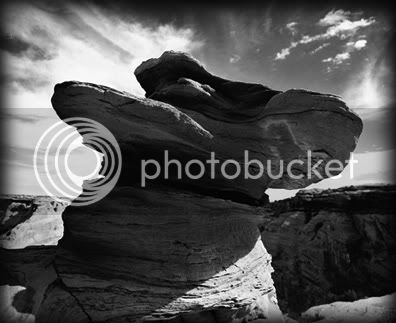 The Southwest is beautiful country but the beauty is a subtle thing; not immediately apparent to someone accustomed to the lush green, and rounded edges of the East. New Mexico can seem a harsh place, dry and barren. There are large tracts of land in which the only thing that grows are the types of tough grasses and scrub brush that can withstand the near desert climate. Even the trees seem stunted by comparison, small, gnarled pines that resemble old arthritic women. But like the Native peoples who occupied this land since before the Christians launched their Crusades, what lives here, is that which can survive.

My first visit here left me with little love of the place. I couldn't see the beauty. And I'm not talking about inner beauty or anything so trivial. I'm talking about God-inspired beauty that can take your breath away. The truth, I've since discovered, is that that sort of beauty is not just here, it's a central part of its essence.

The land, and the people who live here, have a different mindset that only begins to explain their fierce devotion to the land. It is, in fact, a quantum difference from the soft East, and you have to train your mind to appreciate the nuances of life here.

Part of the difference is the speed of life. It's not so drastic as say life in South America or even the Deep South of the United States, but things definitely move at a different pace. It's not at first even a perceptible shift, but more of a feeling that life here has it's own rhythms and cycles and that until you become attuned to them, you are forced to interpret what you see in the light of your own experiences, rather than how they really are.

The first thing you notice is how different the light is here. At over 6500' feet above sea level, the light behaves differently. Unlike other places in the world, especially the terminally overcast Northeast, the sun is a constant entity. While rain does fall, it comes and leaves quickly, leaving an almost fire-cured freshness to everything. But already civilization has begun to change even that. As more and more homes are built, even with their tiny patches of lawn and dwarfed trees, the climate has begun to change. The same is true of other desert climates such as Las Vegas where the average rainfall is significantly higher than it was even forty years ago, a huge leap in terms of changes in weather patterns that historically take hundreds or even thousands of years to change even slightly.

This is still the frontier. It hasn't been tamed by man, or squashed by industry. Back home, most things capable of harming you, with the exception of mosquitoes and poison ivy have been systematically exterminated.

We don't stand much for danger in our nation's oldest section of the world. We leave that for the frontier. In the East, we deal with the occasional snowstorm of six to eight inches and we endure the weeks of sunless winter days, but other than that, we don't really have to deal with a lot of adversity.

We don't have earthquakes or tornadoes. For the most part, we don't see floods or forest fires. No mudslides or hurricanes threaten our mobile homes. And avalanches are unheard of. About the worst we can expect are French Canadian tourists. I know that sounds terrible, but I know some people who would argue that they'd prefer riots to French Canadians. There are times when I would agree.

But today, I'm in wild country. In the past six months, there have been several bear attacks within an hour of where I now sit. One occurred in the mountains near here, where a grandmother of ninety-eight was attacked and killed while cooking beans in her kitchen. Now I don't know a lot about bears, but from where I come from, that's pretty brazen.

Another incident was reported within months of the elderly woman being killed, where a man was forced to shoot a bear that he found in his house. I'm not a member of the NRA, nor do I support unconditional rights for gun owners, but this seems to me to be a perfect example of why Americans should be able to own guns.

Sure, England doesn't have the guns we have, nor the violent crime that goes with it, but you don't hear about anyone in Nottingham Forrest getting eaten by bears while eating fish and chips in the kitchen. The founding fathers knew we had bears, mountain lions and the occasional French Canadian when they wrote the constitution. We may be a unified and sophisticated nation, but much of our great country is still pretty wild.

Just a few months before my brother-in-law Patrick and his wife Hae-Jung had their baby, they were hiking just a few miles from where I now sit at the foothills of the Sandia Mountains. Patrick was walking ahead of Hae-Jung with the dogs when he came to an arroyo, a kind of dry creek bed, and came face-to-face with 400lb black bear.

No matter where you live, you never really expect to run into a bear. At first, Patrick thought it was a dog and looked up to see if he could locate its owner. Then he took another look, and a good look it was since he was only standing about six feet away, and he realized that he was starring into the face of a bear with his pregnant wife only several yards behind him.

Fortunately, the bear decided there were better places to be right at that moment and he took off up the mountainside.

The wild nature of this place can touch you in unexpected ways. I don't know if they can be described as good or bad. The human race, in general, has the tendency to judge the world around us as good and bad in terms of how it effects us personally. Sometimes, nature is not good or bad. It just is. In this instance the bear went its way and my brother-in-law went his. No reason for it really, just the way it happened.

But surely this is beautiful country, where the sun shines almost constantly, the humidity is low and the sunsets brilliant. Perhaps it is the harshness that helps one appreciate the delicate nature of its beauty. I don't honestly know. I'm not sure if I have an answer, but I have hope.

A few miles down the road from the first lost dog sign, we came upon another sign; it read, "Found: Two Golden Retrievers."

Meanwhile the sun sets to the west and reflects across the Sandia Mountains in brilliant patterns of light and we sit here at the foothills and watch the stars come out one by one. It is a magnificent gift from God and for this I am grateful. There is so much about this world I don't understand. So much about a loving God that seems contradictory with the harsh reality of our lives. But tonight, I sit beneath the same stars that Abraham saw and thank God for the grace to see another day.

It is so little and yet, it is enough. Or so I hope.

Senior Member
This was a BEAUTIFUL illustration. It took my breath away. It makes me want to go hiking or camping.. and now I really want to take a spontaneous trip to New Mexico, just so I can hope to touch a piece of the wilderness you describe. The insertion of the "two golden retrievers" was excellent, lending a sense of purpose and serendipity to the experience. And of course, you had to throw in those French-Canadians which made me laugh. Overall a beautiful recollection of the last frontiers in this great country. Brava!
B

Senior Member
Thanks RH. What a lovely response. I'm glad it touched you. Sometimes, there's nothing harder than to get writers to read other writers' work. I'll look for yours.

Senior Member
another gem of yours, david!... i have to wonder why you're posting these pieces here and not submitting to major magazines... you are a very fine writer and should know it...

as for the content here, you've plunked another of my heartstrings!... i spent much time in the deserts and mountains of arizona and new mexico and love it as much as i love the sea... you brought it all back to me, with a master artists's word-brush... thanks much!

love and hugs, maia
B


mammamaia said:
another gem of yours, david!... i have to wonder why you're posting these pieces here and not submitting to major magazines... you are a very fine writer and should know it...

I do submit pieces as well. But sometimes, it's nice to get some more instant feedback. The other piece, "I'm Not From Here" was published in New Jersey Monthly. Not exactly a "major magazine" but hey....