Have you any puns or funny comments worth sharing? (1 Viewer)

Senior Member
Then there was the dyslexic devil worshiper who was shocked and horrified to discover that he'd sold his soul to Santa.

Friend of mine hit a deer. It totaled her car, but she was okay and insurance was paying her far more than her car was worth, and she'd be able to buy a new one. This didn't stop her from going on at length. Crying about the car, crying about the deer, crying and crying... I'm trying to be the understanding friend, but I'm starting to run out of patience. Finally, she blurts out, "Have YOU ever hit a deer?!"
I said, "What, you mean like, in the FACE?"
It was quiet for a long moment, and then she shouted, "WHAT is the MATTER with YOU?!" and BANG! slammed the phone down. She never called me again.

I just love a happy ending...

‘I thought I wanted a career. It turns out I just wanted paychecks.’ Anon.

‘Women will never be equal to men until they can walk down the street with a bald head and a beer gut and still believe they are handsome and sexy.’ Anon.

‘Behind every successful man is his woman. Behind his fall is usually another woman.’ Anon.
L

Senior Member
A pun walks into a bar and two tables of five people die.
Pun in ten dead.

‘A clear conscience can be the sign of a fuzzy memory.’ Anon.

‘You do not need a parachute to skydive, only when you intend to do it again.’ Anon.

Senior Member
What do you call a monkey in a minefield?

A vulture boards an aeroplane, carrying two dead raccoons. The stewardess looks at him and says: ‘I'm sorry, sir, only one carrion allowed per passenger.’

Senior Member
Sixteen sodium atoms walk into a bar. They are followed by BATMAN!

Senior Member
Three men out for a night on the razzle find a park slide. Beside it is a sign that says, "Any word you shout riding on this slide, you will land in a pool of". 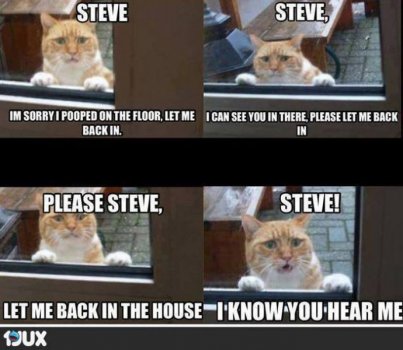 Senior Member
Three nuns playing darts in a pub, slightly the worse for drink. One scores twenty-five, barman calls out "Twenty-five!" Second one hit the side of the board, then a double-top with her second dart, but it falls out so she ends up with a score of three. Barman yells out "three!"

Third nun, determined to do better, and a more accomplished darts player anyway, scores double-top and then double-top again. Her third dart, unfortunately, bounces back and, in a one-in-a-million chance, sticks into the first nun's head. She drops down, dead.

Barman, without missing a beat, shouts out "One nun dead and eighty!"
:lol:

Senior Member
Two men walk into a bar. The first man orders H2O. The second says, "I'll have H2O, too!"

Senior Member
What do undertakers do with dead chemists?

Senior Member
(I'm legally blind and color blind, so I get these two all the time)

When two blind guys are fighting, try and spice things up by yalling at them:

"My money's on the one with the knife!"

A blind guy walks into a bar...

Senior Member
A man walks into a bar

The second man ducks
Show hidden low quality content
You must log in or register to reply here.