Grand Fiction Challenge 2021: A Blaze in the Northern Sky (1 Viewer)

Welcome to the Grand Fiction Challenge, 2021!

Please note that this is an invitation challenge, based on involvement with the 2020 challenges. I've posted a list of ways to get an invite in the Coffee Shop. PM me if you think you should have an invite but have not received one.

Prompt: A Blaze in the Northern Sky

Second Place
$20
Half a year of FoWF

All entries anonymous. Send them to me by PM, and tell me whether you want them to be posted in the secure thread or this public thread. You will have a two-day grace period to make edits before I post your entry. This means that if you send me your entries on the 14th, you can still send me edited updates on the 15th or 16th.

Any questions, please PM me or ask in the Coffee Shop thread. 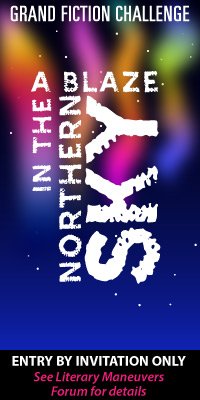 Things Will Never Be The Same (1000 words)
​
​
I remember thinking it looked like a candle, so bright against the dark north sky. By then, I had been watching the blaze for about an hour and time had dulled the horror of it all. I was surprised it took the fire truck so long to respond but it must have been the siren that roused Mam because that was when she joined me at the window.
​
​
“Isn’t that Nuke Newman's place?” she wheezed, the stench of her booze-laden breath hitting me full in the face. I backed away, disgusted. “Good job it’s deserted.” she muttered, quickly losing interest and dragging herself back to her bed.
​
​
Except it wasn’t empty, they found what was left of the bodies in the rubble after the fire.
​
​
I was twelve years old then and didn’t remember Nuke Newman but I knew he was celebrated around these parts, on account of being a veteran of the Christmas Island atomic bomb tests. He died a couple of years after being discharged. People say he was full of cancers. Nobody wanted to live in his shack after that.
​
​
Me and Billy Cooper, my best and only friend, sort of adopted Nuke’s shack, seeing as no-one else seemed interested. We used it that whole summer, just to escape from our crappy lives. Billy was worse off than me. His old man was a gambler, as well as a drunkard and he used to take out his gambling losses on Billy and his mum.
​
​
Me and Billy took care of ourselves. Sometimes we stayed at the shack all night and nobody missed us. They were the happiest days of my life.
​
​
When school went back, Billy started knocking about with Tubby Henshaw, a fat kid with spots, who sat near him in class. Nothing seemed the same after that. Billy didn’t want to go up to Nuke’s shack much anymore and I got to thinking that he didn’t want me around either. I confronted him about it but he just laughed and said there was no problem.
​
“Prove it then!” I said, “come up to the shack after school today.”​
​
I waited up there for nearly an hour and I was about ready to leave when I saw his bike coming up the hill towards me. I couldn’t believe it! He had Tubby Henshaw with him and they were chatting and laughing together as they pulled up outside the shack.
​
​
Henshaw seemed to know his way around. He flipped our home-made padlock open and walked into the shack like he owned it. He even lit the kerosene lamp that we had taken up there.
​
​
I grabbed Billy and had a go at him but he just laughed and told me to chill. I shoved him away from me, turned away and started the long walk home but, when I looked back, he wasn’t following me. He had gone into the shack with Henshaw and I felt the rage rising in me.
​
​
I walked back but, when I opened the door, they were sitting at the rough table that we had built with wood from Nuke’s derelict shed. The lamp was burning between them and they were laughing again – talking about me, I expect. I swear I don’t remember picking up the rocks but I do remember the sound, as one of them caught Tubby Henshaw just above his eye. The blood was incredible. It seemed to be everywhere and all of us were kind of caught in that moment, silent and unmoving.
​
​
Then all hell broke loose. Tubby was wailing and holding his head and I was ready to claim victory and tell him to get out and never come back, until I noticed Billy. He was looking at me with a kind of angry disbelief. He asked Tubby if he was okay and picked up the lamp to examine the cut on his head.
​
​
The rage really hit me then. I flung the other rock and saw Billy’s body jump, as it caught him on the shoulder. He dropped the lamp and we all watched it fall. It was like a slow motion video. It hit the edge of the table first, then tipped and tumbled, exploding as it smashed on the floor.
​
​
At first, it felt good that al I had created all this chaos. I felt the situation called for it. Then it got sort of unreal as the flames leapt up Billy’s legs and engulf the whole table. Billy and Tubby were just one burning blob in the middle of the room and the screams were horrible.
​
​
Then I was running, the roar of the fire and those screams pounding in my ears. I didn’t stop until I was back home and up at my bedroom window.
​
​
Nothing was the same after that. Mam kept drinking and sank deeper into the swamp that was her life. The men she brought home got rougher and dirtier and I had no way to escape. Billy was gone and I was alone.
​
​
They found Mam on the bed with her head bashed in. The detectives weren’t interested… blunt force trauma, they said, before the quick, cheap funeral put an end to the fleeting interest they had shown. They never found the murder weapon. Pathetic, really, considering they walked past it on every visit. I don’t believe they would have found that rock even if I hadn’t washed it before I put it back in the yard.
​
​
​
​
I still come up here to Nuke’s shack sometimes but it’s not the same; just mossy bricks and broken wood where my paradise used to stand. It doesn’t even seem peaceful anymore. The locals say it’s haunted but that just makes me laugh. There are no ghosts up here. All the ghosts live inside my head; the screams, the angry eyes, Mam gurgling on her own blood. They taunt me every day.

They are to blame for the rage that drives me now. Whatever comes next is down to them...​

The Valley of Decision
or
How Mars Came to Be