WF Veterans
I’m a little late this time because of a few medical issues. Those are mostly sorted.

The haiku is a Japanese form. The term haiku derives from hokku which is the opening verse of a traditional collaborative form renga and its later derivative form renku. The hokku became a stand-alone form through the work of Matsuo Basho (1644-1694). His school emphasized stand-alone hokku by publishing many in its anthologies. His work elevated the hokku from a game of wit to a poetic form. Masaoka Shiki renamed the hokku to haiku in the late 19[SUP]th[/SUP] century. The use of the term hokku to describe a stand-alone poem is now considered obsolete.


The haiku is characterized by three qualities:

1. A haiku generally utilizes two images or ideas that are juxtaposed with a kireji (cutting word) between them, which acts as a sort of punctuation mark that colors the manner in which the two ideas are related. In English we usually consider this a “turn.”

2. Haiku (in English) consists of seventeen syllables separated in three lines of 5, 7, 5 syllables.

3. Haiku utilizes a “kigo” or seasonal reference and is usually about a natural image.


In English there are further constraints on the form. They are as follows:

1. A wistful or contemplative tone and an impressionistic brevity.

3. Imagery predominates over ideas and statements.

4. Avoidance of metaphor and similes.


A common variant of the Haiku that focuses on humanity is called the Senryu.

i r do.dit.
comment would be warranted
where "amnesiac" is concerned.

WF Veterans
Is it right that Haiku have no title, am?
A

WF Veterans
Traditionally, that's true. If there is a title it's usually the date and place the haiku was written. Haiku are so short that adding a title could almost be like adding a fourth line. 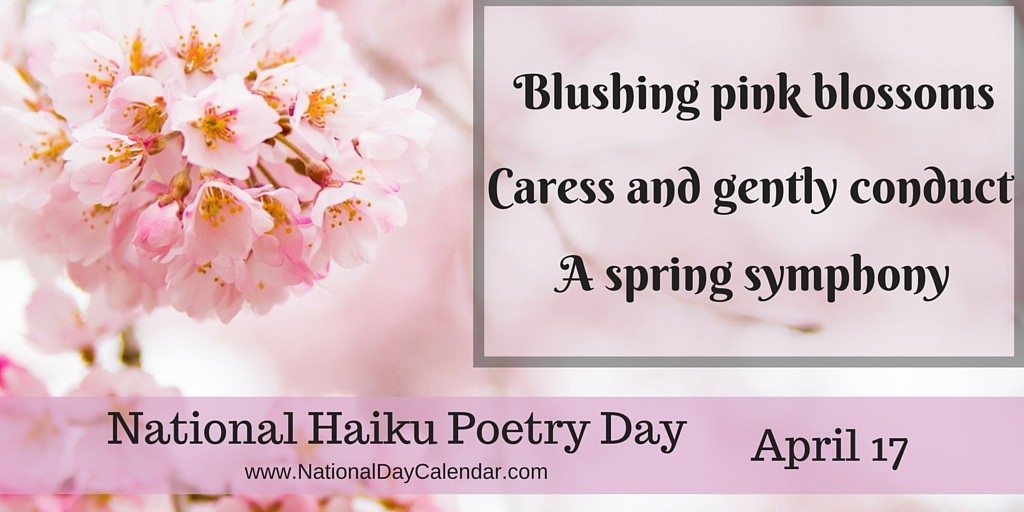 ​
"Observed annually on April 17, National Haiku Poetry Day encourages all to try their hand in creativity. Haiku poetry is a form of Japanese poetry that is non-rhyming and normally consists of 3 lines with a syllable pattern of 5-7-5. Haiku poems are usually inspired by an element of nature, a season, a moment of beauty or an individual experience or event. Sensory language is used to capture a feeling or image." - NationalDayCalendar.com


Whitecaps on the bay:
A broken signboard banging
In the April wind.


According to NDC, "English haiku does not always follow the strict syllable count found in Japanese haiku. The typical length of haiku found in English language journals is 10-14 syllables, versus the 5-7-5 syllables used in the Japanese language."

HOW TO OBSERVE
Celebrate National Haiku Poetry Day by creating a haiku poem of your own! Post your Haiku poem on Social Media using #NationalHaikuPoetryDay.

HISTORY
National Haiku Poetry Day is an unofficial national holiday. The day was registered by Sari Grandstaff in 2007 and implemented as a project of The Haiku Foundation in 2012. 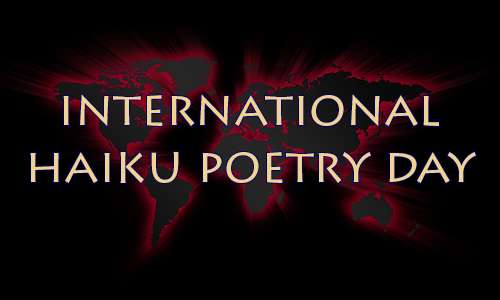 
Do you enjoy Haiku?
What makes it special or unique?
Share your poems in any of the
Submit Your Own links.


Discuss Haiku in this thread! ​

Thanks, Prinze. I was looking for inspiration for today's NaPo Challenge I like the idea of posting to Twitter #NationalHaikuPoetryDay

Next year we could organise a TWitter Challenge as part of NPS.

I struggle with Haiku so it will be a good challenge. It's interesting in the example you offer
Whitecaps on the bay:
A broken signboard banging
In the April wind.

My understanding is that you do not include the month in the actual poem.
Last edited: Apr 17, 2016

PiP said:
Thanks, Prinze. I was looking for inspiration for today's NaPo Challenge I like the idea of posting to Twitter #NationalHaikuPoetryDay


That sounds a bit exotic. I can just imagine saying, "Na-tweh-poh-moh," in a public setting. Yes, that sounds like a great idea. We can also use the #WritingForums hashtag next to #NaPoWriMo. It may attract even more new members!

2. Haiku (in English) consists of seventeen syllables separated in three lines of 5, 7, 5 syllables.
Click to expand...

Ams, I'm a little confused. I've read quite a few Haiku poems recently (as it is a new form to me) and few actually conform to the 5-7-5 rule.

Barbara MacKay began studying haiku in 1972. Since then her haiku has been published in various haiku journals and some have earned awards. She is a member of the Writers of the Mendocino Coast Writers club and meets weekly with a writing group. Some of the publications in which her work has appeared iclude: Woodpecker Journal for Sharing Haiku (all issues, 1999 through September 2002); Mariposa (issues 5,9, 21); Haiku Poets of Northern California Anthology for Members; Crinkled Sunshine, Haiku Society of America Members’ Anthology 2000; Lotos Magazine, The Road Between Mountains (2002); Daily Yomiuri, Go-Shichi-Go-Haiku in English (Jan. 26, 2004); A Travel-Worn-Satchel, Haiku Society of America Members’ Anthology, 2009.
Click to expand...

Her poems can be viewed <<here>>

So how much importance should we place on 5-7-5?

PiP said:
My understanding is that you do not include the month in the actual poem.
Click to expand...

I think these ideas evolve over time. Since Wright died in 1960, it may be that in his era, it was accepted practice.

astroannie said:
I think these ideas evolve over time. Since Wright died in 1960, it may be that in his era, it was accepted practice.

Not happy with two theirs but dunno how to fix it.
Click to expand...

Change the second 'their' as a description rather than a possession.

PiP said:
Her poems can be viewed <<here>>

So how much importance should we place on 5-7-5?
Click to expand...

I have read recently that we shouldn't focus too much on the 5-7-5 rule. In Japanese haiku, you will find irregular haiku.

This Japanese haiku follows a 5-6-5 pattern. 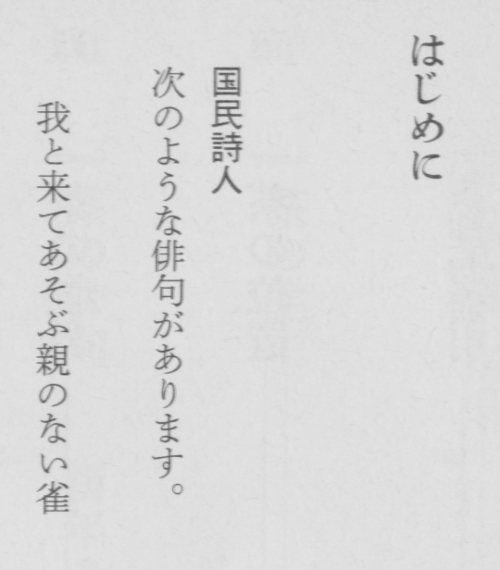 Some haiku do not strictly follow the 5-7-5 pattern. Irregular haiku with one more or less morae than usual are called 字余り or 字足らず, respectively. Some haiku even ignore the 5-7-5 rule completely (See 自由律俳句).
Click to expand...

WF Veterans
Strict observance of the 5-7-5 is not necessary. In Japanese the unit is "on" and while it is roughly translated to mean syllable I think it's a little more complicated.


ETA:
A closer translation would be a lingual term "morae". Morae are a unit of measurement that determines syllable weight (long syllables vs short). This syllable weight can influence stress or timing of a word. For example "u" (in English) is almost always a longer sound than "t."