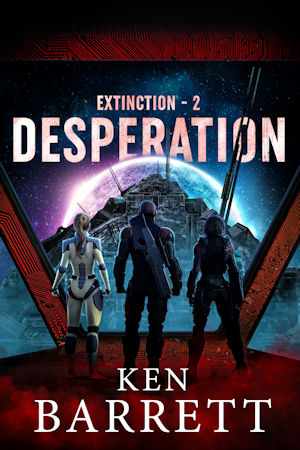 Throughout decades of military service, Earl Koke has never met a challenge he couldn’t surmount or an enemy he couldn’t pummel into submission. Now, with his career nearing its end, he looks forward to retirement and enjoying a peaceful easy life.

When a massive solar storm threatens to reduce the Earth to ashes, Earl is among the last few to reach the safety of the ark starships waiting in orbit. As the vessels prepare to leave, mankind’s survival seems certain, but sabotage to their navigation system sends them millions of lightyears off course.

Lost in outer space, Earl’s dream of a comfortable life vanishes along with humanity’s bright future. As a platoon leader, he can handle wrangling politicians and even civil war, but when their ship’s artificial intelligence decides to take control of human society, he’s out of his league.

Desperate times often call for extreme measures, but opposing a vastly superior mind is suicide. Earl has faced long odds before though, and giving up just isn’t in his nature.