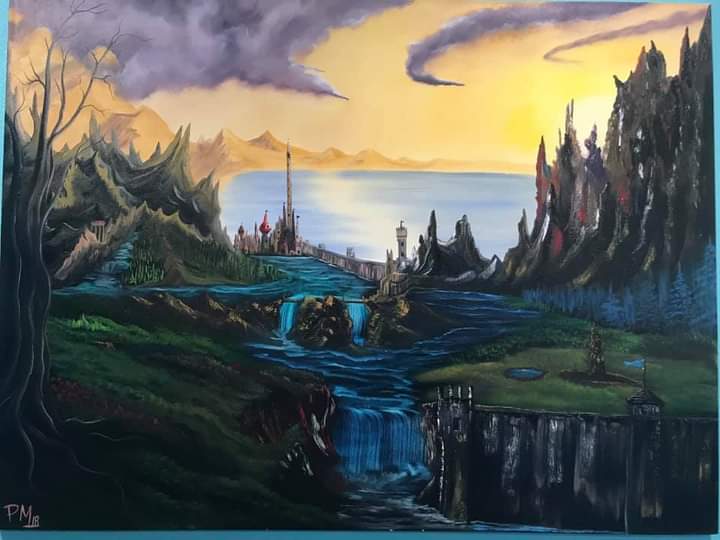 I stood watching from the highest tower as darkness descended upon my kingdom in thick swirling smoke. This was it. Though I'd tried everything, my power to hold back the coming calamity was failing quick. All I had done was for nothing. The land was lost and I would die alone, the last prince of Mithryndale.

No, there must be something more I could do. Perhaps by channelling the last of my power, I could suspend the castle in a pocket of time. It was risky, and sure to rip me apart-- but the castle must not fall at any cost.

When needed, a destined hero is always awakened to restore the fallen kingdom; but the next one wasn't due for years to come and this destruction grew swift and furious. Everything I did to stop it only fueled it's relentless growth. If I could suspend the castle in time, the coming hero remained the only other soul who could wield the time crystal. She'd know what to do...

With any luck, the castle would freeze while I yet remained in tact. That way, I thought, when the hero arrives, she'll see my face and I'll be remembered. You'd be surprised how much memory can be stored in a face. The whole of Mithryndale, perhaps.

From my window I could see the cascading Rivers of Harmony thicken to a black muck, as the grasslands decayed to oblivion. The time to act was now. Goodbye, my love...

Eyes closing, the familiar golden light appeared like an orb around my clasped hands, humming with ethereal resonance. I would need to expand this light around the entire castle, and then activate the time crystal, the most prized royal heirloom. Perched on top of a pedestal in the center of the room, the time crystal was like a tall cluster of galaxy-blue quartz. It glowed from within, illuminating its countless imperfections into intricate constellations.

I walked there slowly, expanding my light with each careful step. This golden orb was the size of the room now. Soon, half the castle would be engulfed--the largest I've ever attempted. (Which was quite painful and I slept for hours afterwards, but no time for that now.

Soon there would be no time at all…)

Lightning struck the Hope Tree down in the royal garden when suddenly the tower door slammed open, sending large splinters flying past my head. My dome of light flickered as I startled.

"Stop!" came a strong voice, then a tall figure in the doorway. Grimacing, I focused more energy into the expansion. The intruder, clad in a long dark cloak and spike-heeled boots, crossed the threshold with one hand brandishing a mighty silver axe. The other was reached back to draw a sword harnessed to their slender back. Face hidden within the dark hood, the only revealing marker was the long yellow braid falling out and down to their mounded chest.

"Prince Killan!" she cried, and the hood retreated like magic to reveal the very face I thought I'd never meet: Deliza, the next hero of prophecy. "You must not freeze the castle! This path is doomed!"

She drew her sword and pointed it to the crystal; the sleek blade shone brighter than my golden power.

I couldn't respond. The castle was nearly engulfed in my light, and the pain nearing intolerable. I focused harder as she crossed the room, claiming there was another way to save the kingdom.

No, the only way.

Too withdrawn to stop her, Deliza grabbed the time crystal and tied it securely into a leather pouch.

"Prince, we must leave now. The portal is waning quick..."

When I let go, she gently caught my fainted collapse. I couldn't debate whether to trust her, at this point my unwavering faith in the hero of destiny was literally all I had left.

The orb retracted back into me and I felt a bit restored, enough to stand. Deliza took my hand and we rushed down the tower to her portal. I didn't ask where it led. I'd find out soon, anyway.

Outside, the darkness crept slowly in.

MindVenture Club- Lucid Daydreaming - Creative Arts - Short Stories has 241 members. Ready to go on a journey? Well then crawl into bed or your favorite chair, and let's go! This club is a...