Senior Member
There was a time when being a fluent speaker of several languages, one of which is Arabic, and being between marriages meant that I loved adrenalin-filled adventures. There was an organization looking for real, behind the scene facts in the most dangerous hotspot in the world.

That is how I, under a fictitious name of Walt McCloskey, made contact with an Egyptian business student. We were introduced at a coffee house on a campus somewhere in the Midwestern United States. He was also the president of the Campus Society for the Freedom of Palestine. Soon afterwards I was on the plane to meet his bosses in the Middle East. He and his bosses never suspected that I served as an interrogator in Yugoslavia, I was not from a pro-Arab leftist organization, and that I was Jewish.

I had a problem, and it was not with having to maintain my identity. It was with the Israel’s Kafkaesque bureaucracy. My fieldcraft had to be perfect. Their databases are the best, and they knew everyone’s alias. That meant I had to enter Israel on my real passport, and once inside Israel, switch to special identity papers made especially for me, Walt McCloskey, hide the US passport, and run the danger of being arrested for using a false identity.

The reception party was better than I expected. The Arabs received me with open arms: I was not a fly-by-night journalist out to exploit their story by staging fake photo opportunities, I was not from an international organization that stirred a storm of lip service and empty promises. I spoke their language, and I did not ask for obvious explanations. I came on a working vacation to live with them, and I brought electronic gadgets as gifts for the community leaders.

I had to hide from Israeli patrols: If I was taken in to custody together with Arabs during sweeps for suspected terrorists, I had a heap of explaining to do and months of time to spend in Israeli detention. It was a double jeopardy. I would be screwed because I would be a leftist foreign tourist without a visa who is abetting terrorists, and after having to blow my cover, I would be a Jew breaking Israeli law by using false identity and my tourist visa.

Whenever they were not in masses and arguing, the Arabs turned out to be very trusting, wholesome and family-oriented guys. The dangerous-looking guys that could wait for me for hours. With utmost loyalty they stood on the other side of the check post, under the blazing sun and the weary stares from Israeli watchtower, and never complained. They only said, “Ilhamdu lilla ‘assalameh.” Thank God you’re OK, and kissed me on both cheeks.


***
Soon I grew to love the Friday morning sermons at the mosque. We were told to beware of the Jews. Jews were hiding under every rock.

It was a game from childhood. I loved covering my face together with the rest of important activists, hiding from the Israel’s hi-tech surveillance drones high up overhead. I loved going home from the mosque to have coffee and date pastries with my adopted family.

I remember bits of pita bread smeared with olive oil, hummus and sprinkled with zaatar. I remember pausing to recognize among the oregano the nostalgic pangs for hated blintzes. A long flashback of all breakfasts from my childhood. Concentrate!

***
I loved using reverse psychology to be told to photograph things they would never let anyone see. I was the first to photograph a ceremony around Jericho where Palestinian Police threw a Nazi-like salute. I took the picture of the young couple, which dared to have held hands and kiss in public, being lynched. I was the one that took the picture of the handicapped children being trained to sacrifice themselves in attacks on Israeli soldiers. I was the one that obtained schoolteacher’s materials that taught children to grow up as suicide warriors. Soon after the pictures reached the United States, The U. S. Congress cancelled aid to the Palestinian Authority’s educational program.

Sometimes I worried about Israel’s own moles. They must have been there, in the thick of it, and they could be good at figuring me out. And then there would no way of predicting the outcome. Triple jeopardy multiplied by uncertainty - it felt like a heavy-duty chess game.

Sometimes I worried about meeting any of the jihad volunteers I interrogated in Yugoslavia.
“You are not Anglo-Saxon,” they said suddenly, during one of the ominously silent meals, causing me to worry for a second. “You are qarayyeb.” You are like one of our family. They never knew how right they were. That made me feel all fuzzy and warm inside, and safe. Safer than anywhere in the world.


The period between marriages ended. I went to my third 007 trip, and I knew it would be my last. The community leaders, the village elder, the men who I thought were nebulously and simultaneously from Islamic Jihad Organization, Hamas, and Fateh, the shy girls, and the coffee house proprietors became my family. The strange familiar feeling known to all adulterers, and so close to hearts of men who have been through many divorces, was that of having to say farewell to a woman who fell in love with you, and to return to the real life, and the real wife. I was married anew, to an incredible woman, and I felt I could not concentrate on being Walt McCloskey.

We were at an Israeli border post; my extended family knew I was leaving for a very long time, maybe last time. The dangerous guy clutching my hand. The statuesque shy girl covered her wet face with her innocent hand. A sister to the secret Jew.

Grown men with tears in their eyes. Walt McCloskey reliving the last, tear-jerking scene from Dances with Wolves.

“Allah yichallik,” they told me. God should protect you. I hugged them back. And was gone forever.
Last edited: Feb 20, 2006

Senior Member
It's non-fiction. Tef? You did this?
G

Senior Member
This is great, Teflon. Really enjoyed it.
T

Senior Member
With mixed feelings of relief and refgret, I have to say it is a cold hard non-fiction. Soon after that I joined Lit and Writing Forums.

Senior Member
sorry to have doubted you, tef, but you have to admit it's quite a lot to take in, as unadulterated non-fiction... dare i ask how old you are?

Senior Member
No prob. Visit back pages of Teflon's Bar and see the adventurouss challenges of a 44 year old multidivorced virtual bartender. Don't miss the stories about dogs and boobytrapped donkeys :-D

Adding a little bit more of memories to this one.

Senior Member
Tef, this was a compelling read...more, more. To write a great story is to draw from your own experiences (that's just for fiction--this is NF), I can't wait to read the rest of your story. See ya at the bar!
R

An intriguing and plausible account. I have no reason to doubt the thuth of your amazing tale- aside from its amazingness. I would enjoy reading more. Please pardon my proverbial grain of healthy skepticism.
T

Senior Member
Yes, had to get that out of my system.
Edited, adding more material before and between the asterisks.

I was getting tired of using bits and pieces of the experience in Debates and whatnots. It feels better to keep it out of arguments.
S

very 'wow'. i'm not sure what to say besides thank you for giving me yet another glimpse of worlds i know nothing of. this is amazing.

Senior Member
Sometimes I remember some close calls that were hairraising for me. Once I helped to do minor house repair, and when I looked for a hammer, I said outloud "I'm just looking for the hammer." Confused in the Semitic languages, I said "hammer" in Hebrew, ('patish') because it is close to 'shikish'. Maybe I wasn't sure about what it was in Arabic. But nobody paid attention.

Another close call was in a mosque. I could do anything I wanted, provided I took off my shoes and was quiet and was invited to pray along. It is easy to follow the Moslem prayer movements, but I got confused again, and I automatically did the move of the Jewish Shem'a recitation, putting my right hand over my eyes. But I had the teflon luck again, because the Moslems had their eyes closed too.
R

wow. hairraising indeed. The courage of people like yourself impresses me greatly

Senior Member
A most interesting account. The daring and courage shown in being Walt McCLoskey are exceeded only in your willingness to risk love and marriage again. Congratulations and thanks for a great read.
T

Senior Member
I wasn't much trying to be courageous. It didn't feel like a holy mission at all. I tried to get to the real stuff. I often worried of something ironical happening, like if any of the guys were actually important terrorists, then the Israel might have them targeted with those smart missiles that zero in on their face and fly into a window. But it turns out that being in a windowless room doesn't help :-D

Maybe I did not raise any suspicions because for the above reasons I was afraid to be around important goons :-D.

None of this surprises me. I believe it happened. I had a similar episode in my own life, but it wasn't with Arabs, it was with real American home-grown neo-Nazis. Strange thing is that I too was "between" marriages at that time---I would say though that your experience was a whole lot more positive than my own, but probably just as dangerous. How odd the Jews... the things we do to satisfy curiosity and fill the time, eh? \\/
S 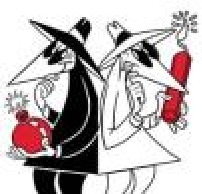 Senior Member
I guess Jews are eternally curious, to the point of being able to assimilate and actually become other people, until being rudely told to get back to the Jewish roots.

Being divorced lets you budget time for other causes, and then youquickly get satiated with them and want to get back into wedlock

The cartoons remind me of my back issues of the MAD magazine and the mag that had nothing to do with spies, the New York culture's SPY! Have you seen it on the newsstands abywhere?

Poor guys. I remember calling my Nextel number I gave them, picked up their messages. They sounded like pathetic relatives. After a year I cancelled my that account. I had nothing to say, either way.
M

Senior Member
You've been a busy boy for 44. How did you ever have time to become a writer and to post nearly 10,000 times in a year and half?

I gotta print this out and reread this.