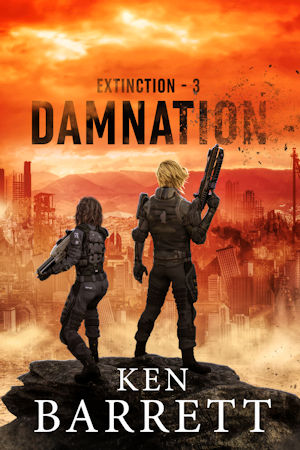 We may survive the fires of heaven, but can we escape ourselves?

No one knows that Liam Collins is an android. How could they? He’s completely human in every aspect and fully self-aware. Like many others, he has recently taken refuge in a subterranean enclave high in the Rocky Mountains. War and famine have ravaged mankind, but he’s safe for the moment, but that won’t last for long.

A massive solar flare is about to consume the surface of the planet, and a new religion is rising that worships the cleansing fire that will purge the sins of mankind. Humanity is prepared to survive the former, but can it survive the later?

Liam has faced difficult times before, but against an army of violent zealots he may have met hit match. How far is he willing to go, and how much of himself must he give up to save those he loves?

Damnation is the 3rd in a series of novels that together paint a complex picture of the future of the human species.