Senior Member
Anyone here done any contests recently? I entered a contest sort of on a whim the other day. I don't anticipate I'll win, but if I make it past the first round or two I'll be happy.

I'd be interested in entering more, and wondered if people think it's a waste of time/money. I don't plan to enter anything with a crazy entry fee, but the idea of making some money if I won is nice. Pros/cons?

I won't enter any that cost money. I'm not deeply into it, but my sense is that some of those contests manage some kind of award to every entry, and the authors are simply purchasing a label to put in their PR. Somehow, I believe editors and many readers see through that.

If you're interested in a contest just for the sake of rubbing shoulders with other writers, we have the Literary Maneuvers contest here each month. 650 words of Flash fiction, normally with a prompt, but they shake that up a bit every so often. Last month there was no prompt, and this month it was a random prompt based in die rolls. Members who place in the top three in any month are eligible to participate in the yearly "championship" in February.

Senior Member
I would avoid any that are obvious scams, but there are some that are legit. I do worry about what you said, though, because there are a lot out there (especially ones with high fees) that are obviously more about making money than about finding good authors.

I'm also avoiding anything where the prize is publication unless I hear a reason not to. I've been reading a lot of agent advice and one of the things they had said was that you don't often get to negotiate a contract from a contest, so that would be problematic, even if they offer a very large prize as an advance.

The one I did enter seems legit, and offers a large prize for the top spot (only top three get prizes) as well as a manuscript critique, so I thought it sounded interesting.

This is part of what makes me nervous, though. I know that there are legit contests, but I worry that I won't always be able to tell the difference. I do have a $20 limit as a max I'd be willing to pay to enter.

notawizard said:
I'd be interested in entering more, and wondered if people think it's a waste of time/money. I don't plan to enter anything with a crazy entry fee, but the idea of making some money if I won is nice. Pros/cons?
Click to expand...

It would depend on the entry fee and prize money. Big prize pots and established competitions I suspect attract thousands of entries so unless you're a talented writer PLUS have a lucky charm your chances are winning are probably zilch.

If I was going to enter I'd chose the smaller and less established competitions. You buy lotto tickets, so why not?

Not many people realise that WF has an annual prize competiton.

Harper J. Cole said:
Incidentally, those of you with invites for February should now have received them. These are the ways to have qualified... 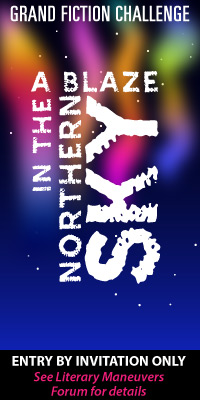 Grand Fiction Challenge 2021: A Blaze in the Northern Sky

Welcome to the Grand Fiction Challenge, 2021! Please note that this is an invitation challenge, based on involvement with the 2020 challenges. I've posted a list of ways to get an invite in the Coffee Shop. PM me if you think you should have an invite but have not received one. Prompt: A Blaze...

To enter the monthly Literary Maneuvers check out this forum for updates.

Senior Member
I entered the Bristol Prize this year. Quite big, not as big as the Bridport, an afternoon spent with the draft and several quid…lost.

And kind of silly, walking around day to day, hyperventilating - hey, but don’t you worry about a thing, next month you’re winning the Bristol Prize - sensation is my thrill.

Shortlisted for a big one once upon a time - or it was big to me. Shortlist is great, printed and invited to a ceremony at a university as their VIP. Even then the dispiriting elements - sight of the ‘established’ writers hawking individual copies of bookie in the foyer is quite grim. Also educated people en masse.

Longlist is worst of all. Your name on a list only you care about. Nobody gets to see the story beyond an undergraduate/word-person reader, maybe two of them, no, certainly three.

I might win The Bristol Prize. My story is excellent aside from a couple of freak lines in paragraph two.

Senior Member
I think the problem I have is that I'm not particularly literary. I think I write quite well, but I write commercially, and I feel like so many contests and such out there are literary prizes.

That said, I also don't do short stories and I'm seriously considering using contests to try some new things. I thought of trying to do a fantasy or sci/fi short story, maybe even my hand at something more literary. I normally say, "I just don't write that sort of thing," but maybe I should give it a go for the sake of improving my skills.

That said, I don't much expect to win anything. It'd just be cool.

Thanks for the link, and good luck, Matchu! I hope you get it.

WF Veterans
All venues are contests. Submitters vie for limited slots. Calling it a contest (versus an anthology or magazine) raises red flags for me, though I might've entered one or two.
P

notawizard said:
I think the problem I have is that I'm not particularly literary. I think I write quite well, but I write commercially, and I feel like so many contests and such out there are literary prizes. That said, I don't much expect to win anything. It'd just be cool.
Click to expand...

I enjoy entering contests, mostly relatively local or relatively small. I've won several: several $150, $100, $50, $25 prizes I can't quite retire to the Greek islands on my poetry winnings but I enjoy winning legitimate contests. I think poets should be paid and this is how I've figured out I can earn a little bit for my poems. I enter both literary and mainstream contests. I enter short story contests too (have won a few of those as well.)

I recently had a poem published in Gargoyle. I was stunned that my work made it there. (A friend suggested I submit something). Shock was what I felt. My pay for that poem was a free copy of the issue with my poem in it. It's a beautiful issue. Most often I get nothing for my poems. So I turned to other possibilities such as contests I know are legitimate (there are a lot of scams out there so we have to investigate and be on guard for the scams). In this case, the contributor copy was thrilling in itself. I love seeing that beautiful issue sitting on my bookshelf. Pay enough! (It's an expensive journal if I purchased an issue.)

Some of the contests I enter have an entry fee. I won't go any higher than $5. Most I enter are $3. When I am willing to pay an entry fee, I like the publication and consider my fee as a way of helping them out. If I win, great. If not, I've helped the publication with my entry fee. The huge prizes for poetry, as I see it, are either scams or for well-endowed publications who can afford to pay winners the higher prize money. Poets like myself have years more to study before that would be a possibility. I'm happy with the small prizes.

This desire to earn money from my poetry came when someone else said "eh, she doesn't receive a nickel"-- making my poetry seem like it was of no significance. at all. As if money is the only proof of something's value. Good luck with your tries. I'm in the process of entering another contest as we speak, one I've won several times in the past. (I also like to recycle the prize-winning poems to places who accept previously published material.)
P

WF Veterans
Oh, one thing I'd like to add is that the scams are the ones who publish everyone that enters. More about that below.

The contests I most often enter usually have three prize winners for their contest categories-- first, second, third, and seven honorable mentions (ten best). Some contests have a first, second third only and some publish only the first place poem. These often get published in the organization's anthology. The HMs don't get in the anthology. The other entrants get nothing.

Much as I dislike the scammers, I know of one relative who got her work included and they actually did declare everyone a prize winner. The prize was to be a copy of their anthology. My relative was thrilled. Then after they announced the winners (everyone) they informed all entrants that to see the anthology would cost another an extra $50. (Wow! That's one expensive anthology!) My elderly relative, who didn't have much money, purchased two. She thought that's the way the poetry world worked and she was proud of her work and was ecstatic over recognition as a prize-winning poet. That was the only poem she'd written and that's all she wanted-- one beautiful poem.

Did I tell her what I saw? Of course not. Why spoil her joy and happiness, especially since she wasn't likely to write more to enter next year. (I asked her her future plans with poetry). But I did look into it more and saw that the lying s.o.b.s claimed they were publishing Robert Frost, Elizabeth Bishop, and other renowned poets. That was for sure a lie, meant to look like it was an important contest entered by all the great poets. Watch for signs of scam as you stay away from the scammers. There are plenty of legitimate contests out there and it's just a matter of finding them.

Senior Member
I think it is an ‘interesting’ business.

There’s always a job advertisement in our local paper to act as a rep. visiting care homes, crafting memoirs, selling them back to the resident-authors, memoirs bound in camel skin @ £22995.

I missed the job interview

…but making a great foundation for a character down on hes (or hes) luck.

Care Home comedies were once one of my favourite pastime [writing] hobbies…a year or two back…probably time to risk a ‘publish’ of dead material upon my Wordpress.
S

Senior Member
I've entered Writers of the future contest numerous times. Of course I've never won, but seeing how it's one of the biggest writing contests on earth, 'honorable mention' can still feel like a win =)

Outside of that, I usually enter cpntests that don't have a submission fee. Not that their getting rich of $3 per entry, but I just sort of hate the principle of it.

Staff member
Board Moderator
I entered in the LM challenge last month. First time I've ever entered into a contest. I plan to do that again eventually, but other than that I don't think too much about entering into writing contests