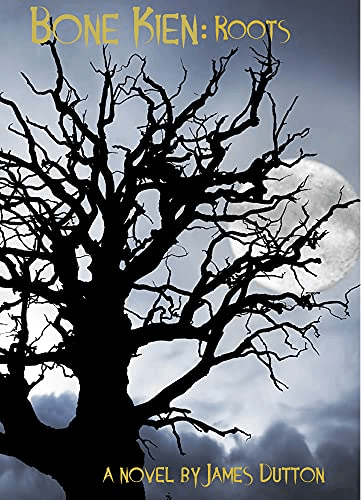 Bone Kien is a haunted castle used as a base of operations for a mercenary organization and the elite group of heroes which lead it.

In the first book of the series, Bone Kien, Teven, Sir Lane, Ket and Anlette, and others defeated a demon army and staved off the revenge of a powerful sorcerer. But now, the very origins of Teven's arrival at the haunted castle are in danger, and a ghost of the castle leads Ket and Anlette to clues on the road they must travel. In the meantime, the Sage of Magic is diverted and attacked. Teven and an elite group must travel to a dangerous dimension to attempt to find and rescue him.

Bone Kien: Roots is suitable for adventure lovers of any age.

Coming Soon:
Tiny Magic, Big Heart, a fairy tale where our intrepid mouse hero accidently becomes enchanted and saves the day.
Part-Time Pagan God, wherein the Olympian God of Luck needs a lot of it to stay alive, and doesn't always succeed!
Moods - a noir murder mystery where a seance gone awry leaves our detective in a kaleidoscopic kettle of quandary!
Bone Kien: Olphinio's Tower - where after two other books where our heroes planned to investigate the environs of a powerful enemy, they finally get around to it!
And if I get REALLY LUCKY, my sequel to Robert A Heinlein's classic, Citizen of the Galaxy. The story of the sequel starts HERE, and is continued through a series of Blogs as I completed the novel, went through revisions, and "field tested" it.

I give a lot of writing advice on WritingForums.com. Feel free to check out this and other novels, then throw it back in my face ... if you dare! LOL
Last edited: Jul 4, 2021
Click to expand...