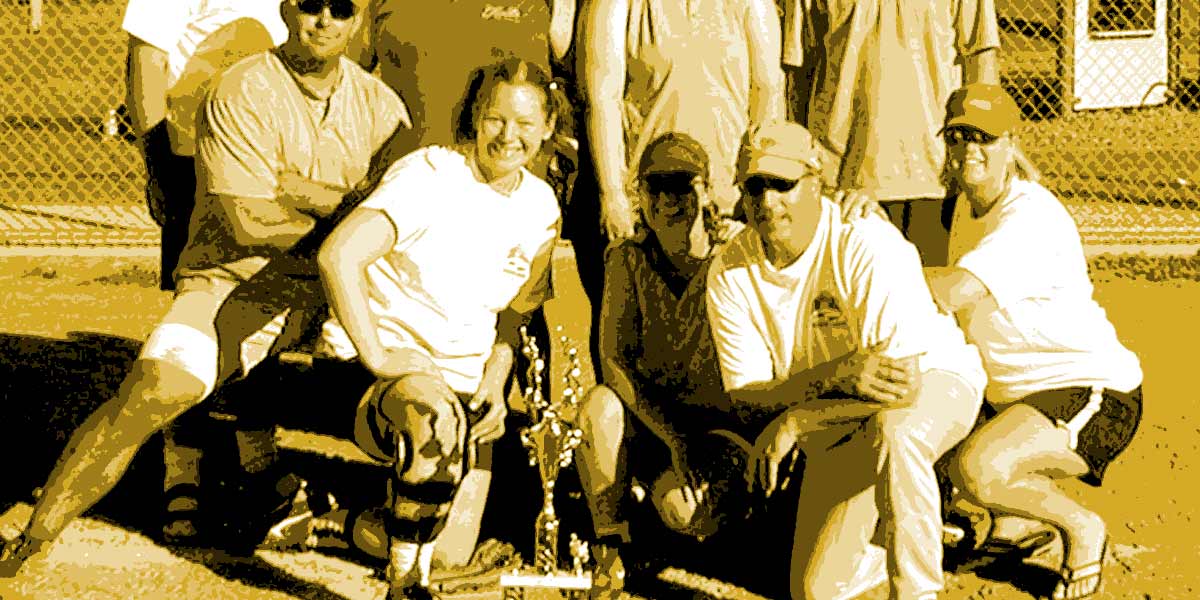 NOTE: This story is true, but I have changed the names for no compelling reason whatsoever.

"I was mad at you for fifteen years," said Joan.

Tom, who was sitting next to me at the wedding reception, shrugged with open hands held out to the side in a "Who? Me?" gesture. Tom's wife, Kate, had a perplexed look on her face, as did The Missus.

It was a surprising revelation, and everyone gave Joan their undivided attention.

Kate was the first to ask, "Tom? Why were you mad at Tom?"

Joan sighed, and took a long pull from her wine glass. The wedding had gone well, the reception beverages were plentiful, and we were all old friends with little to hide.

Or so we thought.

Everyone leaned forward, if not physically, at least mentally, waiting for Joan to continue.

"Well, Dave," (the father of the groom, who was at that moment leading a Boot Scoot Boogie dance line on the floor) "had asked me if I wanted to play softball with you guys in the summer league. He said it was a fun team with no pressure; it was all about having a good time."

Everyone agreed, with The Missus chiming in, "Yeah, for the most part, we always tried to make it fun."

It was that "for the most part" which caused my Spidey sense to vibrate ever so softly. Being on my third beer, I didn't give it much thought.

"Yeah! That's what Dave said," continued Joan. "It wasn't about winning, but having fun. So I agreed and promised to show up for the game."

A cheer went up from the dance floor, and we all watched Dave doing The Sprinkler.

After a few seconds everyone turned back to Joan and The Missus prompted, "So, you went to the game…"

"I went to the game. Now, I was a good softball player but hadn't played for a few years. So I was only a bit nervous, but, hey 'a happy team focused on having fun' was what I was told, so I thought, 'No problem.'"

Tom looked at me and said quietly, "I don't remember this." I shrugged my ignorance as well.

The Missus sent me a sidelong glance as she asked in a low, apprehensive tone, "What happened?"

My Spidey sense was no longer tingling. It was bonging like a Silver Alert text from the government alerting me to BOLO for a confused Joe Biden in a gray Camry asking strangers for soup.

"Well, it was my turn to bat. I hit the ball, and for some reason, it was like a bad dream. My legs felt stuck in deep sand, and I was moving in slow motion."

My Spidey sense was now using a bullhorn on full volume telling me to GET OUT NOW WHILE YOU STILL HAVE A CHANCE! But I wasn't listening.

"And then I hear Tom yell at me from the dugout like a drill sergeant, 'RUN!!!' Well, I didn't like that, and after the game, I decided not to play anymore. I called Dave and gave some excuse about pulling a tendon or something. And, it's stupid, but for fifteen years I was angry at Tom for that."

By now my Spidey sense had thrown up its arms in exasperation and resigned, yelling over its shoulder while leaving, "You're on your own, Buddy! Good luck."

The Missus agreed, "That couldn't have been Tom. But you know what? That sounds a lot like someone else…"

And then slowly, every one of them turned their head in my direction.

I was suddenly gripped with an intense interest in my half empty beer glass, the table cloth and the dance floor.

"Hey! Look! Dave's twerking!" He wasn't, but I needed the cover.

Out of the corner of my eye I could see every head still staring my way.

I threw up my arms in surrender, "Okay! Fine! I don't remember it, but it was probably me. And if it wasn't me, it should have been. I admit it! I'm a competitive, loud-mouthed bastard!"

Everyone nodded in agreement at my confession, even Tom. And then Joan uttered one simple word.

And the table erupted in laughter.

Every group of friends needs an asshole.

In my group, I am that asshole.
Reactions: Gumby, robertn51, Sinister and 1 other person
About author

sigmadog
Sigmadog is the online persona of Steve Merryman, a graphic designer, illustrator, and winner of over ninety regional and national awards. Living in the woods just west of Idaho (USA), Steve is retired but occasionally takes on projects that interest him (tell him about yours – he might do it!). Steve spends his spare time painting; writing; chopping firewood; shooting guns; hiking with his dogs; savoring the occasional beer; searching for the perfect cheeseburger; and wondering where he left his pants.

I love the suspense you created here, Steve. Story kept me hooked right until the end.
It's alright. The Asshole is a designation of respect in my circles. Every group has one. People think the group leader is important, but no. The Assholes are the provost marshal, the man-at-arms, of any social clique. A rival group of friends is hassling your group? You sic the Asshole on them and provide backing support. A group is only as strong, confident and witty as it's Asshole. Remember it as a badge of respect, for every instance like that, there's a counter instance where you can use your super powers to support those you care about and go to bat for them. No group dynamic is complete without them.

Sinister said:
It's alright. The Asshole is a designation of respect in my circles. Every group has one. People think the group leader is important, but no. The Assholes are the provost marshal, the man-at-arms, of any social clique. A rival group of friends is hassling your group? You sic the Asshole on them and provide backing support. A group is only as strong, confident and witty as it's Asshole. Remember it as a badge of respect, for every instance like that, there's a counter instance where you can use your super powers to support those you care about and go to bat for them. No group dynamic is complete without them.

I'm wearing it proudly these days. Maybe put it on a T-shirt to inform the world.

Part of getting older is the dawning realization of who you really are. I'm learning to embrace my assholery.