The Dreaming God and the Trinities 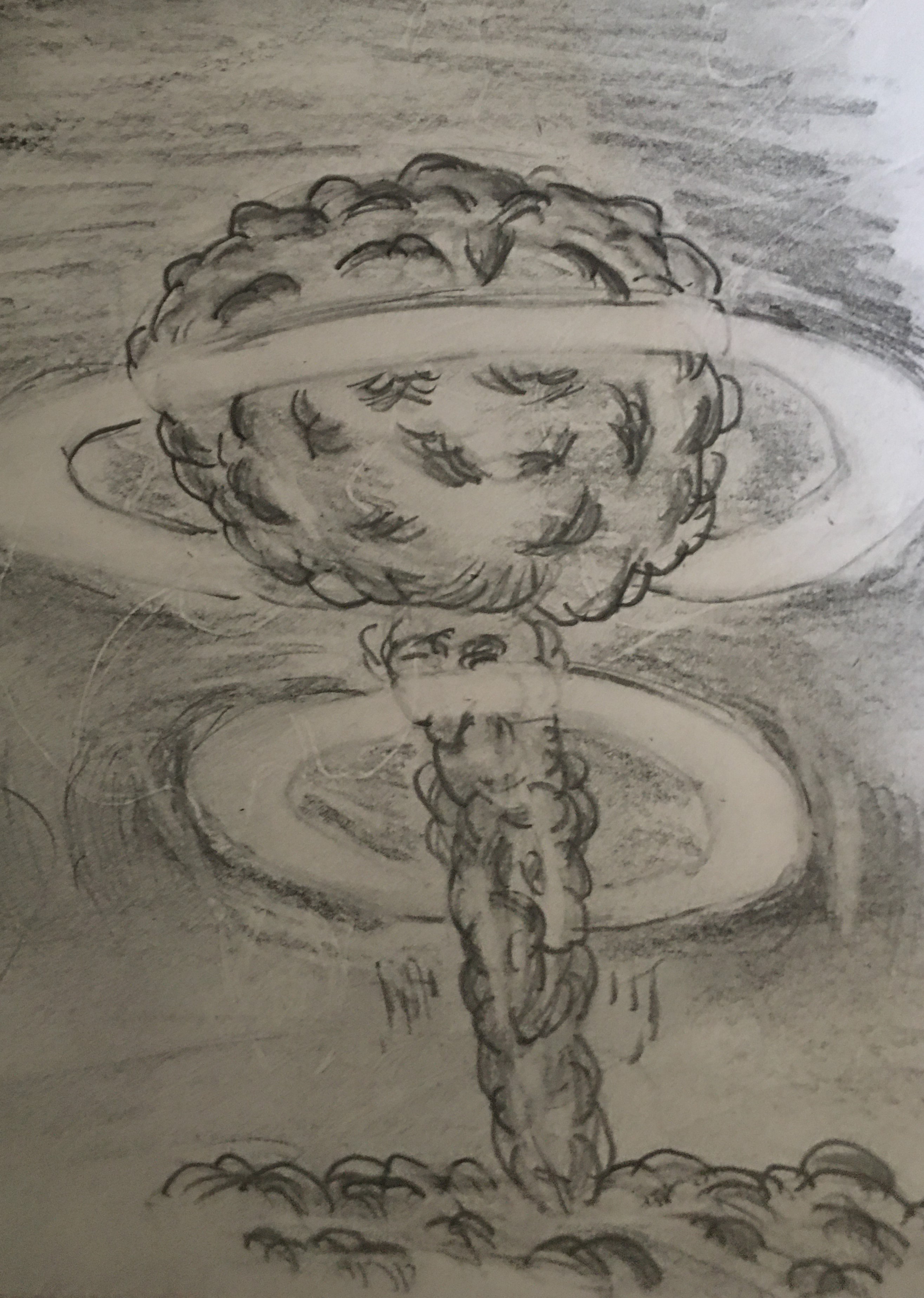 Note: I've been worldbuilding my vision for many years. Many of my characters live in my mind as does the multi-dimensional and philosophical landscape. I'll be showing some of my character studies and landscapes in order for the casual reader to get a glimpse of my work. Here is a vision of what I perceive as the multi-aspects of God.

In the Nothingness of Nothing is where you will find the Ultimate GOD, the Master Dreamer, Weaver and Master Deceiver. IT, She, HE, We, They, What, Who, or whatever you may want to call it, found ITSELF doing absolutely nothing in the no space of no time and place that IT spun in its golden weaves on ITS GODMADE Spinning Wheel for ITSELF.

IT had nothing to do, nothing to think about, and nothing to say. It had no conflicts, no diversity, IT didn’t hate, love, laugh, become angry, or any of those things that would make IT feel alive. IT was a Dead No Thing that needed to learn what it was to think, dream, and BE. The only thing IT did feel was Numbing Boredom.

It was time to lift ITSELF from ITS self-made prison that IT spun ITSELF in and start all over again which IT did again, again, and again, but this time with a few different twists it didn’t try before, before, and before.

IT decided that diversity would be ITS new theme. IT would divide ITSELF in Three Major Parts and in those parts, IT would divide ITSELF again and again. IT would make ITSELF a Dreaming GOD and give each part a plethora of dreams to chew upon. It couldn’t wait for the betrayal’s, scheming, warring, loving, hating, and all the Things that made Being, such fun as well as hateful. IT lifted ITS Spinning Wheel and started to Spin and Weave ITS Glorious and Stupefying New Dream which was an Old Dream becoming once again a New Dream……

One Trinity appeared then two and finally three. Each grew at its own pace, dreamed its own dreams, sang ITS own songs and made its own themes. The oldest and strongest of the Trinities tired of dreaming ITS own dreams; so, IT invaded the other two Trinities dreams and hijacked their songs and became dominate over them. It demanded that they share all of their dreams with IT and dare not dream their own dreams without ITS permission. After a few eternities the Dominant Trinity forgot how to weave ITS own dreams and sing its own songs and lived solely off the songs and dreams of the other two. IT let its skills in the magical arts entropy and forgot how to create a pure Dreamscape from the stuff of dreams and sing the songs of creation but what IT lacked in the magic’s IT made up for in ITS strength and warring skills.
………………………………….

The ZiOnA Trinity consists of two female aspects (Tiona and Tileona) and the other (ziona). IT is the second eldest of the tri-trinities and very similar in temperament to the ALLaHMaHEiN Cabal. It was Tiona, the left-handed aspect, of the ZiOnA Trinity that inadvertently incited the first of the Trinity Wars by jumping into an ALLaHMaHEiN Dreamscape. This was the first of billions upon billions of shared dreamscapes between the trinities but the dark aspect of the ALLaHMaHEiN Trinity (DiAthAnaToS) never forgave Tiona for laughing at HIM during sexual play in that first dreamscape. HE convinced the Totality of ITSELf that it was THEIr Right and Destiny to control, direct and co-write all the dreamscape s of the Tri-Trinities. IT therefore devoted ITS energies to the art of manipulation, warfare, and treachery, and let its magics ride on the coattails of the other trinities.

As eternities wore on the other aspect (ziona) felt the dynamics of power shift towards ALLaHMaHEiN’s favor. In time IT would totally dominate and become the Prime Trinity. It reached out to the EDoNi Trinity; told it of its concerns and recommended a strategic alliance between the two. The Dark Aspect (LuciFer) of the Edoni Trinity totally agreed with this assessment and was ready and willing to join forces as a Bi-Trinity. edoni, the other aspect of the EDoNi Trinity, was on the fence with forming an alliance. It saw both sides of the issue and saw the ramifications and outcomes of what would happen if one was formed or not. It was the Light Aspect of the Trinity (Lucifina) who disagreed with the Ziona assessment. She stated that there was no need for an alliance as that would only enflame the ALLaHMaHEiN Trinity to all-out war which would create a rift in the fabrics that made up the dreamscapes.

The EDoNi Trinity consists of two Aspects, LuciFer and Lucifina (Male and Female) and the other (edoni). This was the last of the major trinities to appear. This trinity differed than the other two in that in that the Female and Male Aspects had equal Voice. Like the previous two IT dreamed its dreams and grew at ITS own pace. IT also jumped into the ZiOnA and ALLaHMaHEiN dreamscapes to experience diversity. The ALLaHMaHEiN Dreamscapes were a favorite of Lucifina’s (the Light Aspect of the Trinity) as The ZiOnA Dreamscapes were of LuciFer’s (the Dark Aspect).

As the No Time of Time wore on; more and more of THEIR dreams were being co-opted by The ALLaHMaHEiN Dynasty. The ZiOnA Dynasty‘s urgent request for a Bi-Trinity Alliance between the two to stem The ALLaHMaHEiN Trinity’s dominance over them was turned down due to the Light Aspects’ insistence; that an all-out war would create a rift within the fabric of the Universes’ causing chaos and possible annihilation of all the Trinities. Due to this decision the ALLaHMaHEiN Godhead became the Prime Trinity, The Puppet Master who pulled all the Stings and became the Prime Director of all the Dreams that were spun by all the Trinities.

After billions upon billions of dreams under the total domination of ALLaHMaHEiN, edoni the weaver of the magics and sorceries’ “the Domini of the EDoNi Godhead” created a Dreamscape within a Dreamscape without any direction or knowledge from ALLaHMaHEiN. IT created a Dreamscape where IT split ITS two Aspects from ITSELF where the Light and Dark Aspects (LuciFer and Lucifina) could interact with each other (as separate entities) and where They could create Their own dreamscape with various Entities, Landscapes and whatever else dream strings they chose. IT also showed ziona of the ZiOnA Godhead how to create the dreamstuff to create what IT had created as a kind of peace offering for not joining in the Bi-Trinity Alliance and for a way for both of Them to get out under the Watchful Fist of ALLaHMaHEiN.

The ALLaHMaHEiN Trinity consists of two Male Aspects (Dialiarties and Diathanatos) and the other allahmahein. This is the eldest of all the Trinities’. This is the only Trinity who communicated directly with the Ultimate GOD or what is commonly called “The Dreamer” or “Dreaming God”. The Dreamer imparted to the Trinity all the magics, incantations, sorceries, knowledge and lore needed to create, spin and weave ITS own dreams.

After trillions upon trillions of dreams the dreamer started to grow weary and bored of the similar type dreams that allahmahein was spinning and so directed the Trinity to make new Trinities. IT (the Dreaming GOD) directed allahmahein to make Two Major Trinities slightly smaller and less powerful than ITSELF (the ALLaHMaHEiN Trinity) impart them with all the magic’s, sorceries, and incantations needed to make the dreamstuff that would enable THEM to weave THEIR Own dreams as well as create minor trinities in similar fashion in the way THEY were created.

IT (ALLaHMaHEiN) was to let the trinities grow and dream ITS own dreams without interference or direction coming from IT. Only when THEY (ZiOnA and EDoNi) reached maturity can allahmahein and the Godhead seek for Primacy. If for any reason the Trinity displeased or disobeyed The Dreamer‘s wishes, IT would than wake up from ITS Dream and End the Multi-Universes and all the dreams that were in it.

The Dreaming GOD stopped communicating with ALLaHMaHEiN and went into Deep Dreaming upon creation of the ZiOnA Trinity. The ALLaHMaHEiN Trinity had ITS instructions and followed them to the letter. What Choice did IT have...?

Next entry in series The Divine Idiot