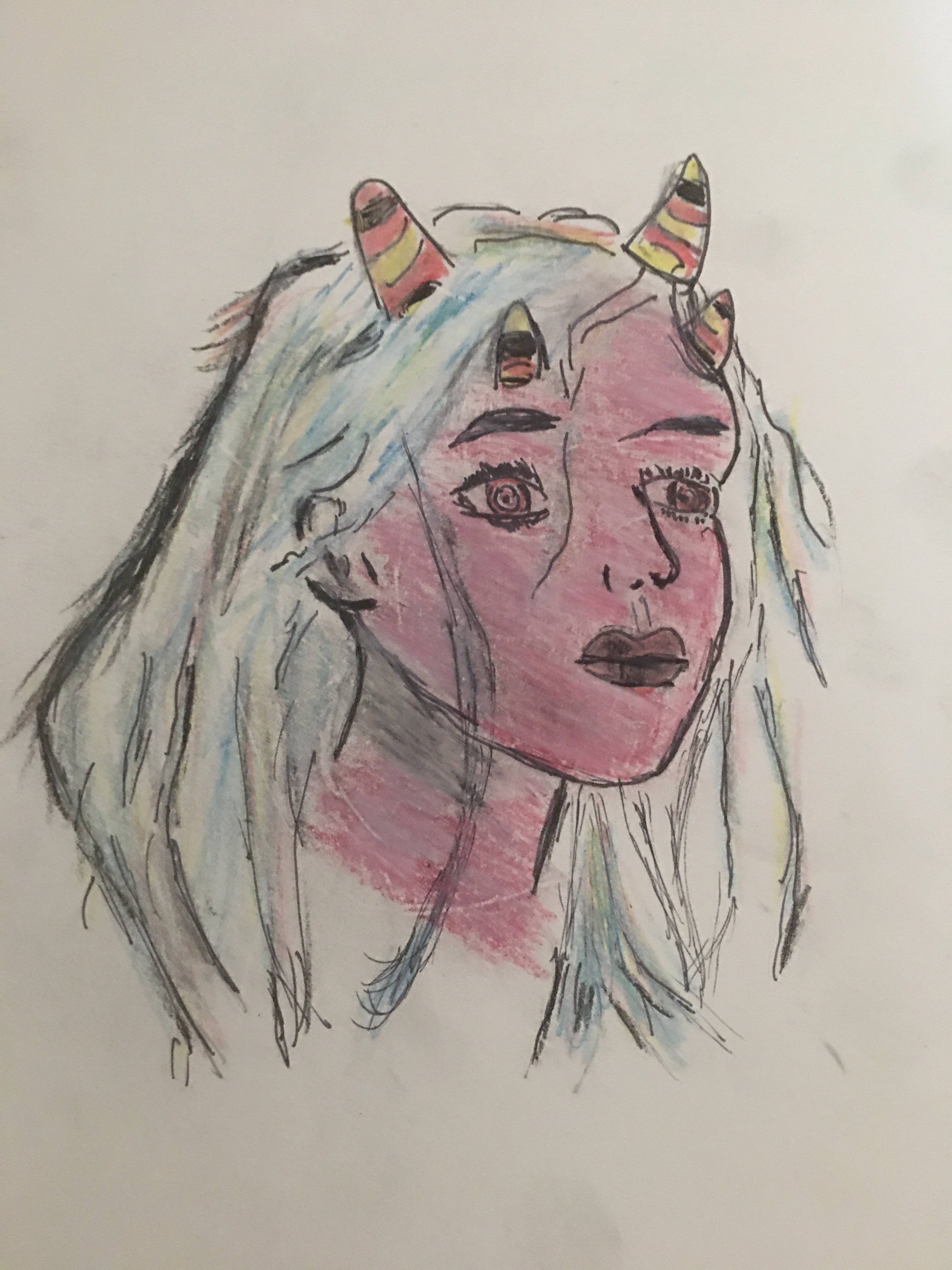 While in the womb She devoured Her Male Twin taking His essence into Herself. She shapeshifted into a flesh eating cockroach after sensing that He was deformed and of deranged mind: eating Him whole.

She caused Lilith all types of problems. She gave her heartburn and aggravation while residing in the womb. She shifted in all types of forms while in the birth cavity; a wolf cub being her favorite. She loved gnawing on the placenta and umbilical cord on Her little wolf teeth; causing Her Mother a considerable amount of discomfort. She liked using Lilith’s belly as a punching bag to pass the time away, as well as screaming, howling, and barking, to test the strength of her lungs. She enjoyed Her stay in Her Mommy’s belly and would have stayed there forever if not for Lilith’s threats that she was going to cut open Her belly and rip Her out if She didn’t come out of Her own accord. The World (mainly Lilith) called out to Her to put Her feet on the ground. She reluctantly left Her little cocoon of paradise; sliding out of Her Mother’s womb into the Arms of Her Father.

She pushed Her relationship to the limits with Her mother, brothers and sisters in Her early years, even though She loved them dearly. She mostly did the opposite of what they asked of her, rarely listened to them, and hated the word no. She was quite rambunctious, headstrong, and spiteful, was of a hot temperament, mischievous, passionate, fun loving, good natured, and greatly loved in spite of her being a demon of epic proportions.

The opposite was true in how she acted and behaved around her Father. She acted like a sweet little demon around Him. She was His little imp whom He enjoyed being around. She made the pain he was always in tolerable. Only She, and Lilith, could make LuciFer laugh and smile which earned Her the gratitude of all those who loved Him. Sateen worshipped Her Father and made a vow that she would find a way to heal His burns and rid Him of His pain.

Sateen possessed an extremely passionate nature. She was a sexual predator, easily aroused with a huge appetite. She was sexually active in all Her shapeshifted forms as well as Her own, with all She found desirable. When She was an adolescent, She met Lucifina’s Son Joshua. When She first laid eyes on Him and smelled His manliness, She experienced multiple organisms for the first time in Her young life. She called Him Her Sexual Soul Mate and vowed that only She would have Him: body and soul.

Like that of a raging fire She was extraordinarily beautiful. In all the forms She possessed it was Her wild beauty that stood out. Her eyes were yellow blue, sometimes red or emerald green, with hair of reddish gold, yellow green or black with streaks of white and red. Her skin was red in the morning, blue in midday, and golden tan at night; She was fire bright, a beautiful sight, with a body that was a glorious and utter delight.


She’s a shape shifter extraordinaire shifting in multiple forms daily. Her favorite form was that of a White Wolf, threes time the size of a normal one. She sired many children in shifted forms the most well-known being the Werewolf and Satyr.

She is the Mother of the SheHeNafa (Satannas and Jesuriah) uni-twins that fused together as one within the womb due to the time dilations conjured up by Death to give Heaven’s forces an advantage in the 1st Apocalypse.

Next entry in series Pandora