I cleared an area for a 100 yard firing range, paced out the distance, set up the swing target and looked for a decent firing position.
A lot of survivalists and preppers make noises about guns and so on, but don’t even zero them in or become proficient with them. I intended to zero in the Mossberg in the coming days.
A pallet and a log at first will do for a makeshift bench-rest.

[video=youtube;wUk5SKoaCM8]https://www.youtube.com/watch?feature=player_embedded&amp;v=wUk5SKoaCM8[/video]
​
It rained on and off for part of the day.
Saw a pine-marten mooching about near Mike’s bunker. I caught the tail movement disappearing around a corner. Then about a minute later I noticed it’s inquisitive face peering out from the shadows underneath the shed-complex. It had a nice grey and tan coat with a somewhat bush tail. Kind of like a cross between a weasel and a fox I guess. Although it’s somewhat longer than a fox.
It was a curious little thing and came within about six feet of me, before moving away again.
I had my camera, but I felt it would of scurried away at any sudden movements like that. Maybe another day I’ll get it filmed…
Tomorrow is internet update day, along with binning some trash from the Mountain Hold. I wonder how all the videos I’ve uploaded are doing?

We didn’t get back to the mountain hold until just before 2300 hrs.
The next morning I was making breakfast at Kitchen Canopy when I heard a strange accented voice calling up from the road.
I looked down and saw a man and a small boy standing there.
At first I thought it was Biathalon and his son but MMM said it was not him, but Alfred, the eccentric Dutch-American who’d finally returned to his mountain cabin.
He’d found it in good condition save for the chimney pipe being damaged and requiring attention. Hence his visit to the Mountain Hold.

I shook hands with him, noting his grip was not that of a weak and frail geriatric.
He was in his late 70s, his eye’s were as blue as mine and they certainly gleamed with a friendly nature.
His grandson was as all-american as they get, blonde hair and like a child from the 1950s, all innocent yet happy-go-lucky with the life he had. Definitely not a big-city-kid and MMM told me that he wanted for nothing, although Alfred did not let him couch potato it while staying at his cabin.

Alfred was born before the war in Arnhem, Holland. He’d witnessed some of the fighting and death in that place as a young child.
Perhaps understandably he has a complete aversion to firearms of any kind.
Something I found freakishly umanning and queer at first, yet having heard him speak briefly about his time in those terrible days of the 1940s my initial thoughtflow was more understanding.
He was going to start on a long ramble of those times, yet, in a very diplomatic fashion, I steered the conversation away from such negativity with a neutral response. For I have had WW2 machination’s from both sides buzz my brain for quite too long as it is! 

He told me he was an enthusiastic visitor and raconteur of Israel and it’s folk.
Very interesting, I hadn’t met an American in the USA who had been among the Jews there.
On the way to his Cabin we spoke of some our experiences with Israel, mine while working and adventuring in Asia and he from his friendship with a young lady from there who studied in the USA.
There was something of the adventurer about this man, he had an ocean-going boat moored off a port in either Oregon or Washington. MMM told me that Alf could out-hike even him until recent years.
It took for quite a while but we’d made it to his cabin.

A nice cabin it was too. Even nice than Randy’s, for it had a 1000 gallon water tank with an auto-replenishment system from the spring.
Plumbing for a toilet, hot-water shower and even a basement level for a workshop and storage!
Including the basement it had three floors.
We didn’t have too much time to look it over as Alf went over his issue with the Chimney Stove.
During the winter the top had blown off and certain parts were missing. Not only was the rain and snow going to get in, but Alfred had a deceased visitor greet him on opening his stove up! 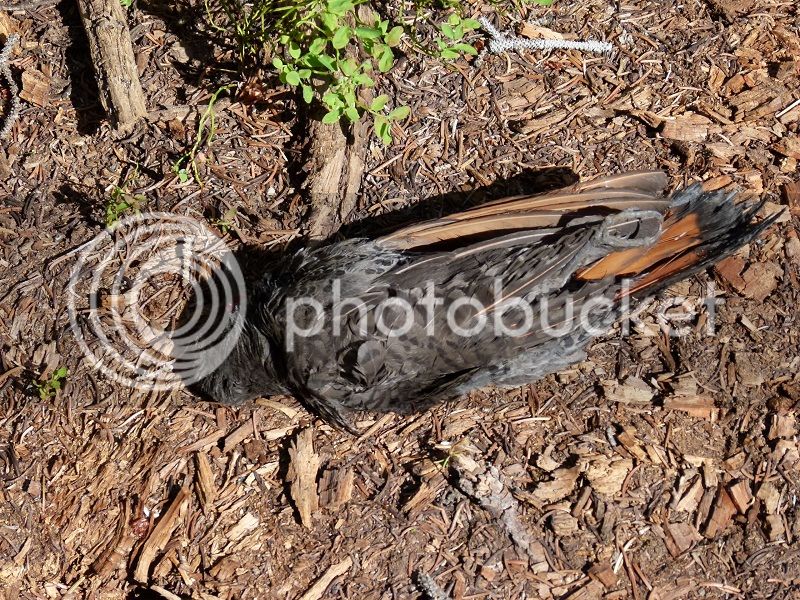 ​
That cap needed fixing but he was no roofer and asked if MMM and I could go up and fix it instead! 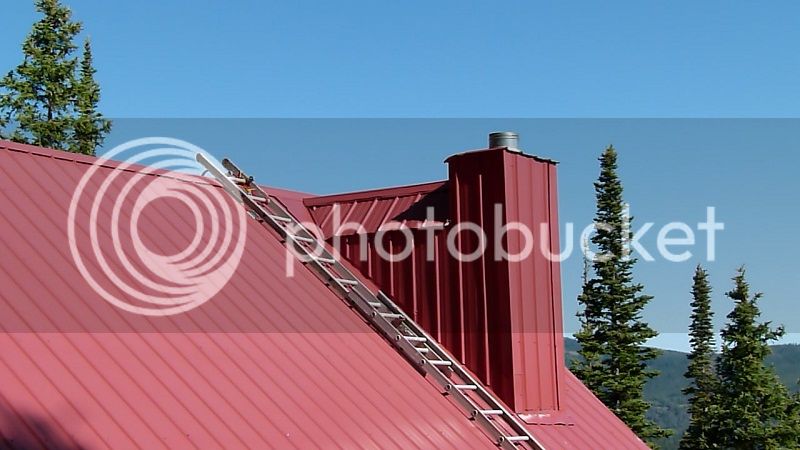 ​
MMM wasn’t too keen on climbing the roof also, so WR had to step up to the plate as it were.
Fortunately I have worked on sloping roof’s before in the UK with my Uncle Garth so I was fairly confident.
Even so MMM asked me if I had insurance, to which I told him of course that I hadn’t any as it was against my self-reliant belief’s.

With that we got started.

We took out a step-ladder and ‘cat’ ladder first of all.
Putting the step ladder on the balcony under the roof Alf did a good job tying it off to his inside balcony.
It would be used to clamber up to the Cat-ladder we’d have going up the sloping roof.
When it was secure I took some rope, anchored it to the end of the cat-ladder and threw it over the roof to the other side of the house.
I made sure I wrapped it in gloves as the caribineer on the end might of ended up smashing a window or worse.
Getting the cat ladder up was ok once we’d extended it a bit. MMM was on the other side and he helped haul it up
Then I clambered on up.

Alf insisted I use a rope to tie myself onto something in case I fall. So I tied a rolling clove-hitch onto ridge-end of ladder rung and left enough slack to get out to the work area.
(I must say that although at first I reckoned Alf’s safety-first mindset reminded me of work back in Europe it did pay off I think as my way would have been more dangerous.)

Getting to the end-unit of the chimney was easy. Removing it from it’s tight grip with the lower end was not the cinch I thought it would be.
When these things are installed they are a very flush fit indeed.
I at first figured it was a screw-in, screw-out job. It was not.
It was instead a ridge-lock fit; About six or seven ‘ridges’ ringed the circumference and I had to wiggle them all out.
With the summer heat blasting down on me Alf shouted up word’s of friendly encouragement.
“Take your time”, “No rush now.” “Do you need any tools?” And other such words creep up from below.

I thought I might need a hammer but tried a long successive amount of jerks and pulls.
Finally with a shout and a ‘bing’ of metal on metal I had it off, nearly losing my balance a bit and wavering backwards.
I recovered though and Alf said to cast down the object, which resembled a strange flying saucer.
I did this and then took in the view of the mountains before clambering on down.

Alf made both MMM and I a tasty lunch then made arrangements to pick up the replacement part the following day.

I didn’t bring my camera for the removal part, but will do so for the installation.

This is the cap that went back on... 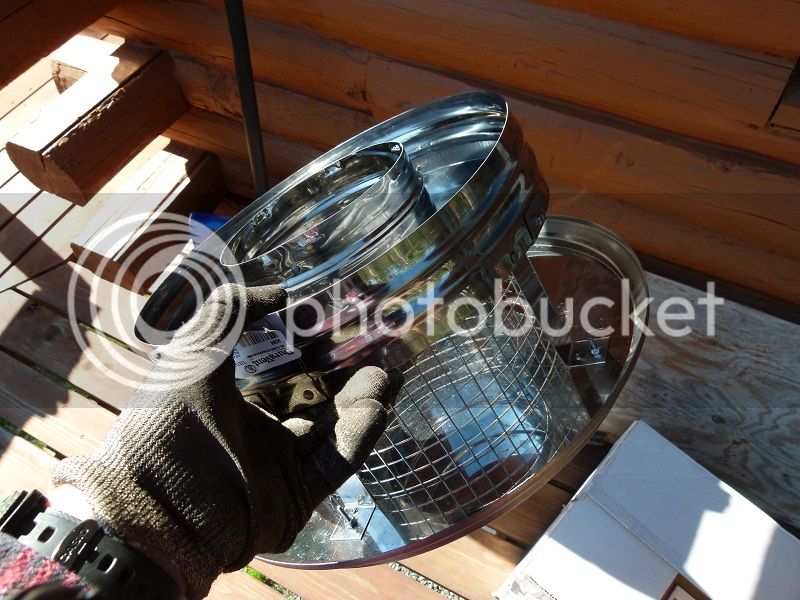 ​
Once back at the Mountain Hold Mike and I remarked on the days doings.