One Skinny Chance in a Sky of Soup 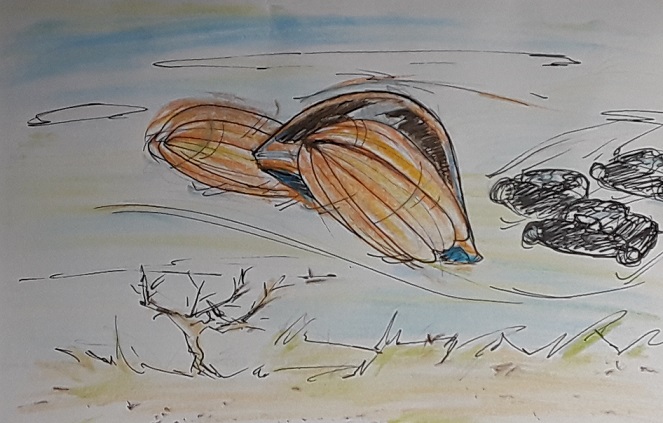 “When this all goes pear-shaped you can't say I didn't warn you.”

Uncle Alex wouldn't leave Mercy alone, not even in the privacy of her own mind, not even now that he was dead.

“Dealing with the Dwightsborough Gang, like to cut you as look at you.”

The Beater bellied as she heeled it over in a sharp mid-air turn, the moment like forever before shooting away in a near-but-not about-face. The Upos (ugly pieces of shit) chasing her were bigger, more powerful, and less maneuverable. She heard the clash-and-squeal of metal as they got into each other. Probably not enough of a collision to do any of them lasting harm.

The Eggbeater had been Mercy's since she had been fourteen. Okay, it had been her uncle's but she had always considered it to be hers and now it was. Stunted thornbushes and a surprised harbadger felt the clattering wind of the Beater as it skimmed over them. A chorus of throaty roars tuned up behind Mercy, The Upos getting the wind back under them.

The Beagle Boys, she remembered them from the old books about Scrooge McDuck. These thugs were ringers except they had fancier toys and worse tempers. Somewhere back there Uncle Alex lay as they'd dropped him, splayed in the dust. He didn't have what they wanted anymore.

She pushed the pedal all the way in and grabbed the Over-lever. The Beater had always had a twitchy overdrive, Mercy hoped hard that this was one of its good days and yanked the lever down.

The Beater's engine-whine slowed, Mercy fought the impulse to shut her eyes. She would need to see to crash-land if this thing bricked. The roar of her pursuers and a glance in the rear-view told her that this was going to go down really bad in

A zip-zing of spooling energy as overdrive kicked in, bringing the Beater's gigs up to max. The little airship took off as though rocket-powered, Mercy hanging onto the controls for support. Her blood sang and she felt a laugh bubbling up from inside. Hysterical, maybe, tears rising, too, but a laugh's a laugh some days.

Mercy didn't look back, didn't want to know. She'd left the thugs behind and that gave her a skinny chance at least. The gigs pulled sky through them, thick as soup. She didn't want to overtax the ship's drive but she liked living, too.

The key with its thick padding of cash felt heavy in her denim jacket-pocket.

These guys weren't in a listening mood even if she tried to explain. She was sadly short of weapons.

She did a mental check. Yep, weapons, zero.

Only one thing to do.

Author's note: Mercy's story is an attempt for me to overcome my own soul-binding perfectionism and learn to get work out there. The sketch of The Eggbeater is, likewise, my original and unglossified work. I've no idea what is going to happen to Mercy from one installment to another so I guess she's in for some wacky adventures. If you've soldiered through reading this, you have my thanks. I hope it didn't hurt too much! -Foxee

Enjoyed immensely, looking forward to the further adventures of Mercy- I love this type of serial storytelling-go mercy go....