Blog entry Gallery (1)
Share:
Facebook Twitter Reddit Pinterest WhatsApp Email Share Link
Yesterday I walked for two hours and twenty minutes. That's about the time it takes a competitive marathon runner for 26 miles. No, I didn't walk 26 miles, but I did walk eight miles, and the pace of 3.4 miles per hour is brisk. Along the way, I learned a few valuable things, which I'll get to below.

I started my walking regimen the middle of April. In early March we took in a stray dog, and we needed a better fence. A friend and I finally got that fence up in early April before our beach vacation, so our house/dog sitter wouldn't have an issue with our new, larger dog and the make-shift fence which was in place before. When I got back from the beach, I decided that laps inside the new fence were an easily defined course. I measured it out and found that 22 laps are a mile. I'd recently hit my peak weight, and I knew I needed to take action. Starting that action encountered some delays, but the presence of the fence gave me the starting block I needed.

My first few days were a quarter mile, then a half mile, and shortly I worked up to a mile. A week later I was up to a mile and a half on some days. On into May, an occasional two miles. Weight started to come off. Pain in my hips started to subside as I strengthened muscle. In June I threw in some three miles days, and then four miles. Two weeks ago, I still felt good after four miles, started a fifth, then was interrupted for 25 minutes by a rain shower. I finished the fifth mile, but it didn't seem valid with the rest break.

Wednesday and Thursday of this week I posted consecutive three miles days, but Friday I had soreness in my calves, and stopped after two.

Yesterday, I began with the idea of another two-mile walk. I'd had some pain in my right calf into the third mile, so I was thinking I needed a few two-miles days in a row to help strengthen it, plus I reversed my course, theorizing that my thousands of right-hand turns were putting extra pressure on my right calf as I leaned around the corners. That worried me that my left calf might need more training for the longer sessions, but that would become evident, or not.

After a mile and a half, my right calf started to feel a pull, despite the direction reversal. 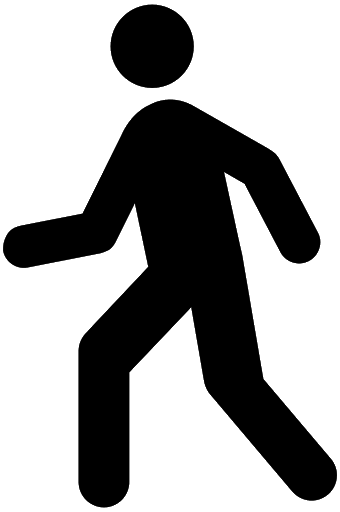 Segue back 35 years. Some kids on three-wheelers were cutting across the front of my driveway and through my yard into a vacant lot nearby and up a power company access to ride beside a railroad track. I wouldn't have minded, except they were clipping an ornamental hedge, creating a path across the yard, and a worse spot by the driveway where their back wheels spun when they left the concrete. One day I was sitting in my office and saw them cut into the yard. I wanted to ask them to just go to the vacant lot to cut in. Barefoot, I ran out my front door and chased them a short distance into the woods. I pulled something right in the middle of the bottom of my right foot. It caused an intermittent sharp pain for years, and finally healed.
What I didn't understand until yesterday was that injury had caused me to favor my step on my right foot to the outside of the foot, probably ever since. By putting my weight on the outside of the foot instead of the middle, I avoided stressing the injury, which felt stepping on a nail each time it activated. I now realize why two pairs of shoes came apart (after a few years), in the area of my right outstep ... just all that extra pressure there from the terrible gait.

You have a lot of time to think in a long walk. I analyzed my stride, and realized I wasn't coming down with weight on my full foot as I should be. I made a conscious effort to correct my stride, and the soreness in my calf went away. I hit two miles and felt good. Keep walking. I hit three miles and felt good. Keep walking. On lap eighty, my right knee flared up and I knew I had to gut it out at least to lap 88 ... four miles. But wait just a second. I'm on the outside of my right foot again. Once again, I corrected my stride, and the knee pain went away after three more laps. I hit four miles and kept going. One slight pause. The lap counter on my phone only goes to 99. I sent the lap record to my email, reset the counter, and kept going.

Toward the end of the fifth mile, lower back pain. I straightened up to correct my posture. I hit the end of five miles pain free again.

I'd just done my previous five miles, but without the break, and now was an hour and a half into the walk. Good time to stop, right? Feeling pain free, no signs of dehydration, and no labor in my breathing, I kept going. Six miles is a nice round number, could I go eight? Fill up the lap counter again? I still felt just the same at the end of six miles. By this time my wife had come out onto the deck with the poodles to read and watch for me to suddenly collapse. She brought out a tumbler of water, so I gulped down 14 ounces and kept going. While it seemed I was going into overkill for this session, I'd been in training for 10 weeks. It made complete sense this was within my capacity.

At seven miles I kept going, and she asked why. "Because if I'm ever going to do eight miles, and I don't do it now, I have to do these same seven miles all over again before I can get to eight. Not efficient." She shook her head. The poor souls who are not compulsive just don't understand these things. ;-)

Seven and a half miles came, and I picked up the pace. In exercise, I've always been proud of my ability to kick at the end. Kicking is not a matter of conditioning, it's almost entirely mental stubbornness. I picked up my regular 48 second lap pace to 44 seconds, then jogged parts of the last four laps to finish with 41, 41, 40, and 35. After that kick, I was finally tired. LOL Good excuse to stop. If I'd just stayed on the 48-second pace, I could have gone on, but I think it was time to stop.

I sweated off two and a half pounds. Even after rehydrating, my morning weigh-in was still down a pound. I'm down 13 pounds from the peak weight which had worried me when I hit it, which is enough to drop a size. Even though I still have quite a few more pounds I want to drop, obviously my fitness level is good. The walking builds muscle, drops fat, is great for my cardio-vascular system, and also builds lung capacity. Eventually walking at that pace causes me to take deep breaths, but at no point was I out of breath. Good news.

While the exercise was great, the valuable things I learned about correct stride and posture were even more important. These fitness gains pile up. Working muscles is everyday living. Carrying around extra fat is useless work. The more muscle I build and fat I drop, the easier and more efficient the exercise gets. Our bodies are heuristic machines. They pay attention to the signals we give them and morph to fit our needs.

Tell it you need nothing but fat, and we'll pile up the fat. "Okay, buddy, all you need to do is sit in that chair? Well, if you ever can't get out of it, I've got you covered for a few weeks. I've built up fat to last!"

Tell it you need to move, and it reconfigures to let you move. Tell it you need to lift? It builds up arms and chest. It makes life easier for us as long as we give it the right signals. I'd forgotten that for a while.
Reactions: Theglasshouse, ritudimrinautiyal, PiP and 3 others
Share:
Facebook Twitter Reddit Pinterest WhatsApp Email Share Link

You make an interesting point re shifting weight to compensate for an old injury. Another important lesson (at our age LoL) is to recognise how far you can push the body in the quest to reach goals before inflicting stress on different body parts such as knees, hips, feet and back.

My downfall was pilates. I am not built to bend in half or contort into various other positions. That said, I should have scaled right down rather than stop so at least I maintained a certain degree of flexibility.

Keep at it, Jim. Make the most of mobility; you don't appreciate what you have until its gone Listen to your body and understand its boundaries.

PiP said:
You make an interesting point re shifting weight to compensate for an old injury.
Click to expand...

I fought the same thing today. I only did two miles, but after the first half mile I started to get pain in my right shin. Again, I had to concentrate on EVERY STEP to flatten my stride back out. It's odd that 35 years after that injury, I'm literally going to have to retrain myself how to walk properly. I expect it's going to take some time and constant attention. But ultimately, it will save on shoe purchases. ;-)

What's shocking is if I didn't keep pushing for that 2+ hours walk, I'd have never discovered the issue. I had diagnosed it as the right turns, when it was actually the poor stride.

Tonight we watched the 4th of July fireworks both in Washington DC and New York. You may not know this, and if not you may be surprised in eye-opening fashion, but with an orchestra involved it is traditional in the USA to play the 1812 Overture during 4th of July fireworks shows ... I suppose because the explosions of the fireworks fill in for the cannon. I have an uncanny and, for practical purposes, useless, talent for whistling along with any classical music I've ever heard before without missing a note. Some pieces, like the William Tell Overture or the Poets and Peasants Overture, I can simply whistle in their entirety from memory.

In the last couple of years, I've been embarrassed to run out of breath at points in the 1812 Overture or Stars and Stripes Forever. After the last ten weeks of walking at rapid pace ... not tonight.
The 1812 overture is a rousing tune Happy belated 4th of July.