Lest We Forget - Remembrance Sunday 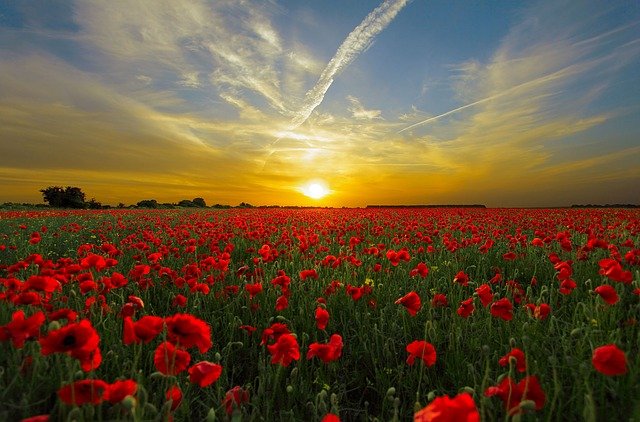 Two minutes silence marks your death
as we the nation remember
your sacrifice, with respect.
The silence echoes our private grief
while we the nation mourn our heroes.

Heroes, born to die in far away places
in battles old and new.
Haunting bugles lament your loss
while the Big Guns, salute you.
And we the nation remember
as we find solace in our thoughts.

Red poppies of Flander’s Field
their seeds from death and blood, reborn.
While we the nation wear with pride
our medal of respect.

What is Remembrance Sunday

Remembrance Sunday is held in the United Kingdom as a day to commemorate the contribution of British and Commonwealth military and civilian servicemen and women in the two World Wars and later conflicts.[SUP][1][/SUP] It is held at 11am on the second Sunday in November (the Sunday nearest to 11 November, Armistice Day,[SUP][2][/SUP] the anniversary of the end of hostilities in the First World War in 191 8. Remembrance Sunday, within the Church of England, falls in the liturgical period of Allsaintstide.[SUP][3]
https://en.wikipedia.org/wiki/Remembrance_Sunday

To put the poem in context. Today's service.

[video=youtube;z87aa-FDzJE]https://www.youtube.com/watch?v=z87aa-FDzJE&feature=emb_logo[/video]
Yes. It is beautiful. And I wish more of us would literally take those few moments every Nov. 11 to remember. Mine is a family of warriors. My mother's clan Ritchie fought with Bonnie Prince Charles at the Battle of Culloden (1746). On the English side fought the Irish Cooks, mercenaries to the English army for over a hundred years (obviously, the gene pool got together a little later. . .). In more modern conflicts, great-great (?) grandfathers fought in the Boer War and the Spanish Civil War--a direct relative survived the disastrous Charge of the Light Brigade (ref Tennyson's poem of the same name)--my father was in the hell of WW I for four solid years, and suffered 'shell shock' the rest f his life. My (much) older sister joined the Canadian army for WW II, as did two cousins (one killed); two other cousins fought in the Korean War (one killed). So, yeah, the Cook family certainly did its bit, a bit shared by tens of thousands of other Canadian and American families.