Back to the Gates Again! 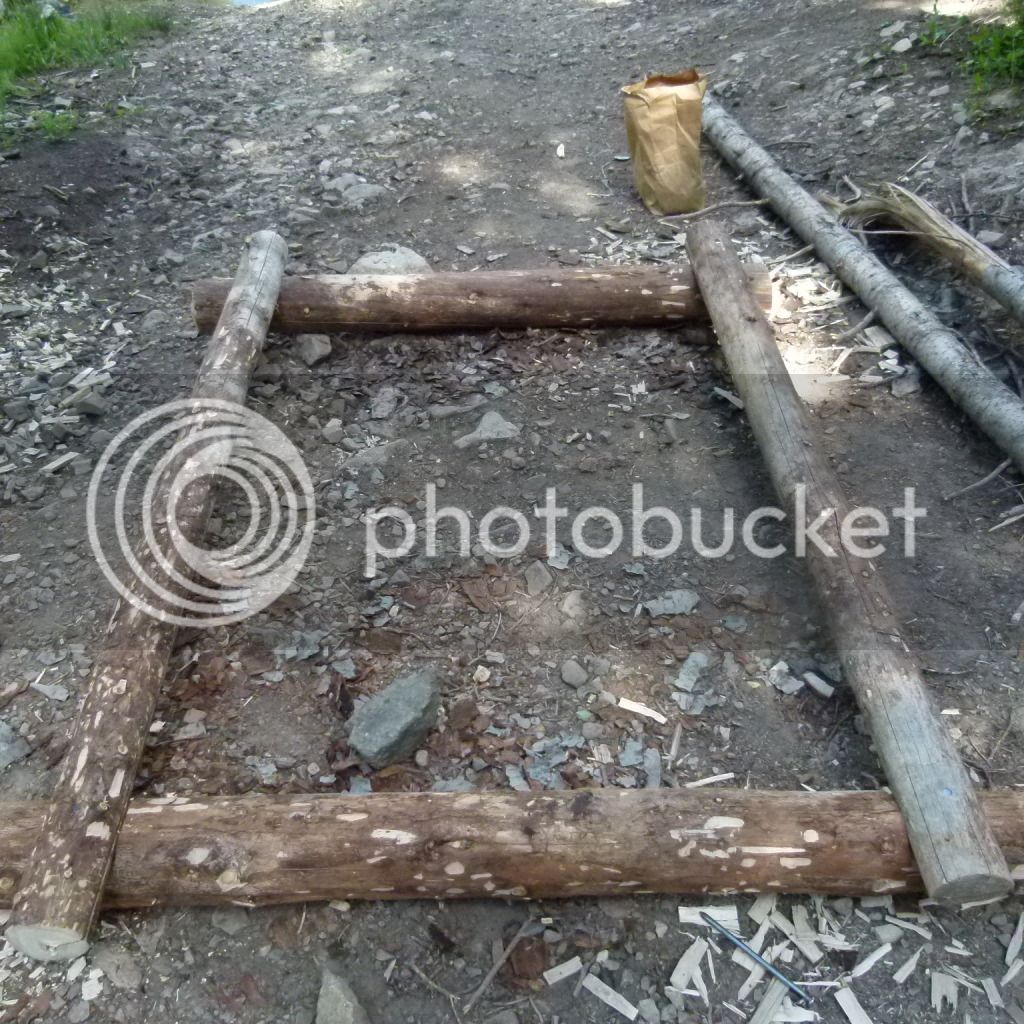 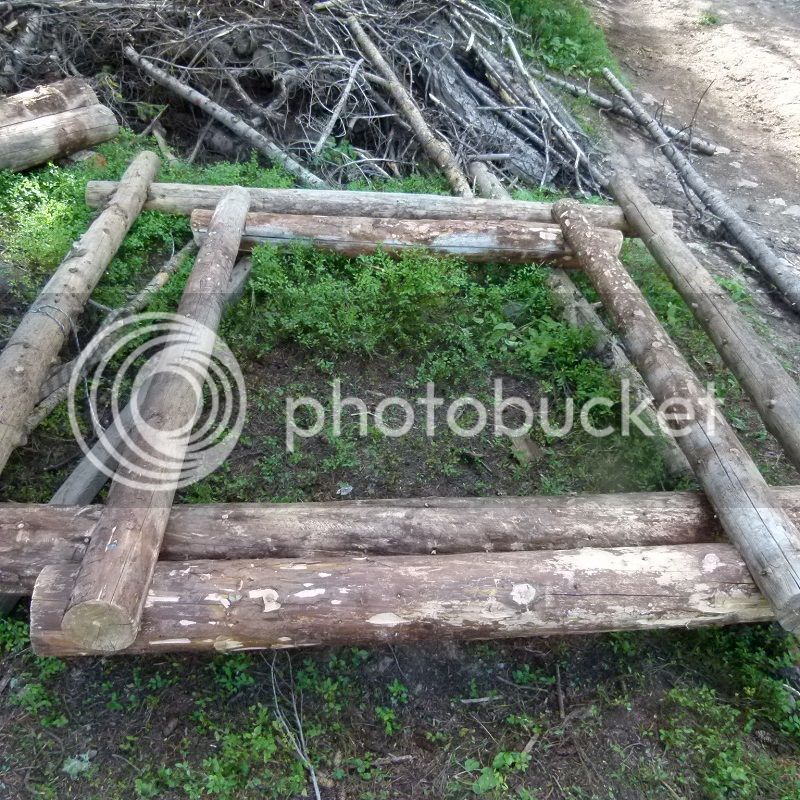 And a third one also done! 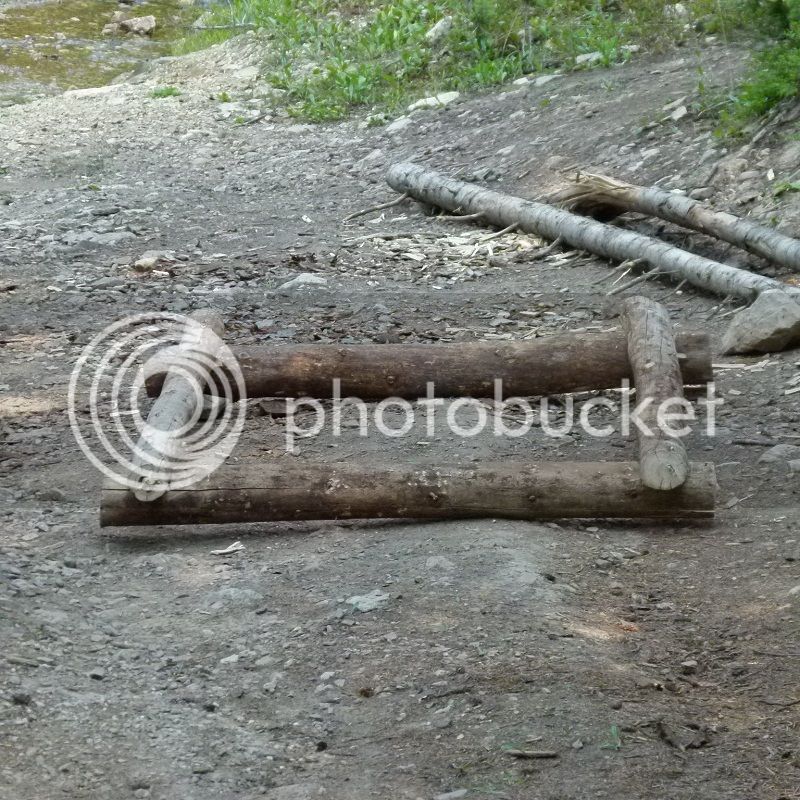 ​
I get the fourth one in sized and notched, but leave it laying there in sections for now.
I’ll spike that later as I want to concentrate on the smaller gateway first.
This is partly because if there’s any screw-ups I want them on that entrance rather than the big main entranceway that everyone will notice more.

Taking off the bark from the logs, quite important to keep the rot-factor down 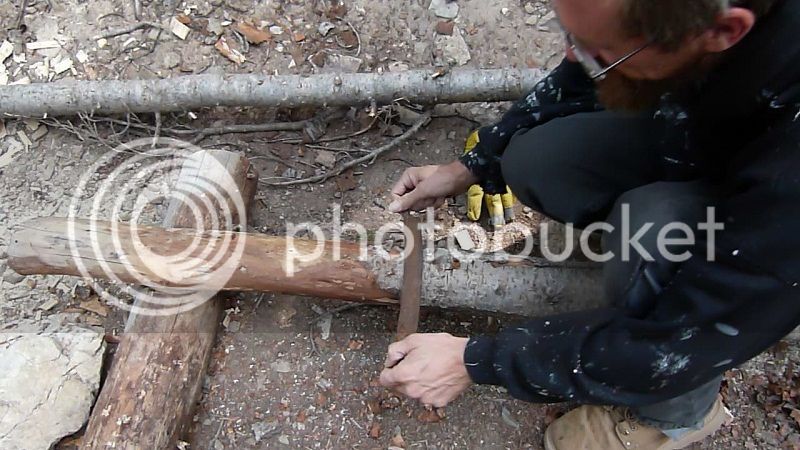 ​
Concreting in the big post I raised earlier, the wedges have held it well so far, but it’ll need concrete for the strain of a gateframe and the looming snow in winter… 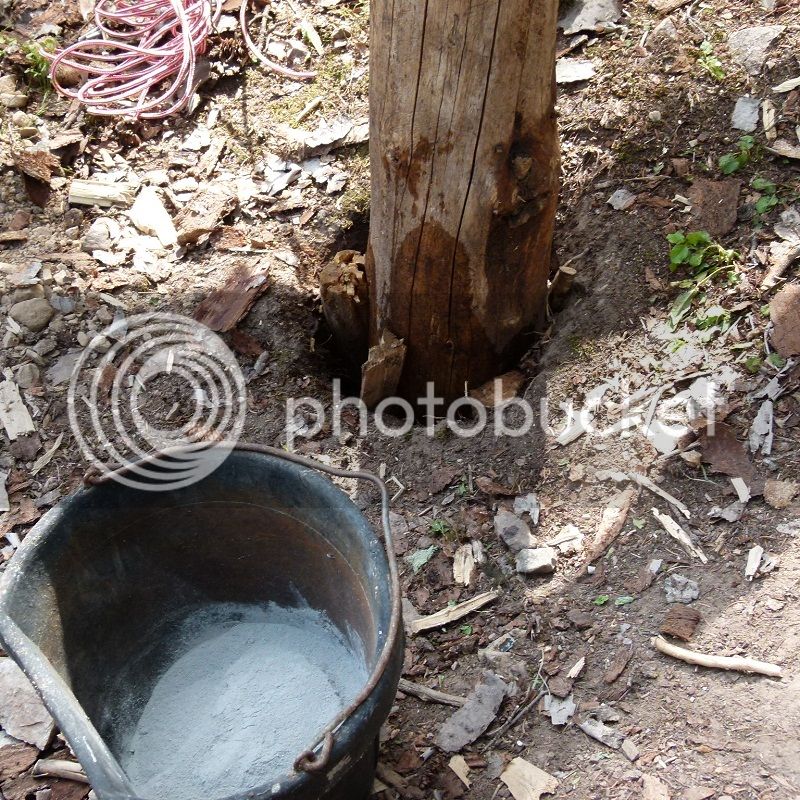 Now to let it set for a few days.​
MMM reckons that if it dries out too quickly it’ll crack.
For the next few days though it’s rainy and cloudy.

I use this linseed oil stuff prior to getting the hinges on it, this area needs all the protection it can get: 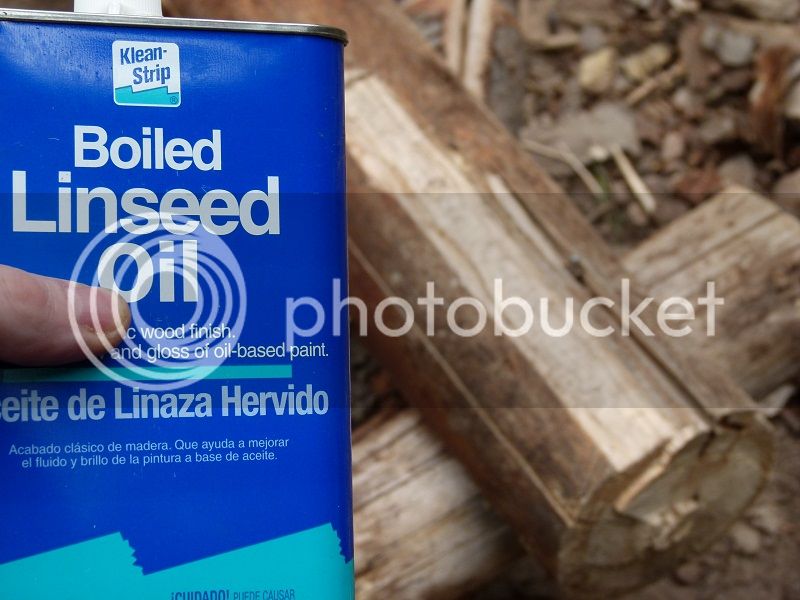 ​
Getting the hinges on it, these 14 inch one’s are the biggest I can find in the surrounding county! 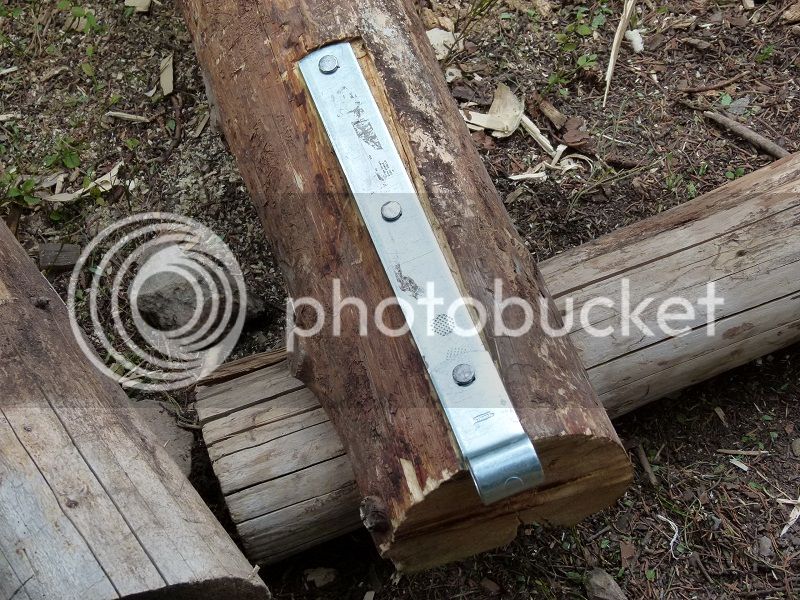 While moving the clunking gateframe about on my own I nearly end up with it landing on me!
It’s difficult to describe but basically, with it upright and me trying to slide it into a better position it started to topped sideways!
I kinda pushed it back upright but as I did so the entire thing began spinning around on it’s axis while trying to fall over.
After spinning around about three times I let go at the right moment and it rested against the tree. If I’d of mistimed my crazy move the entire frame would of gone crashing down the mountainside!

Both hinges on now, next step is putting the screw bolts into the tree itself.
These are what the hinge staples will sit on.
I’m kinda dreading this moment as precision carpentry / joinery isn’t my strong point.
If I get it wrong, all this work will be seriously flawed… 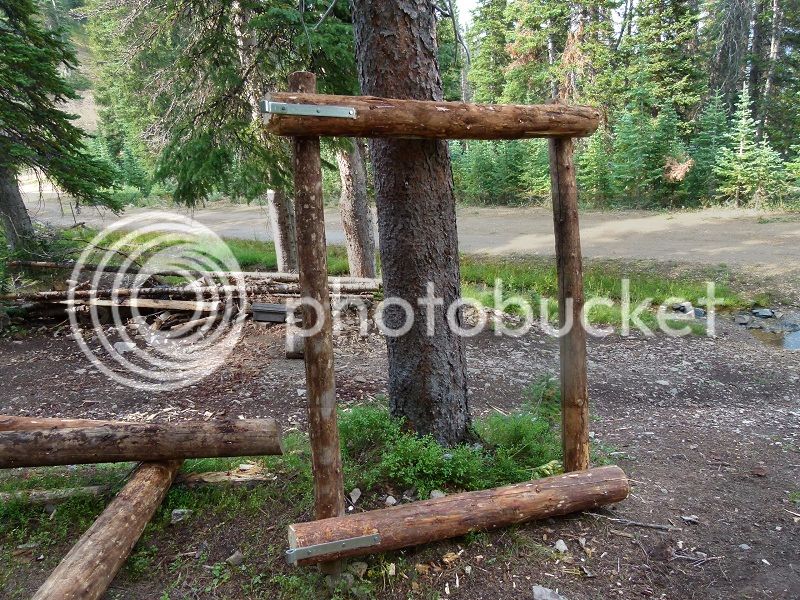 ​
Let me tell you, getting the screw bolts in was not easy. In fact they are impossible to do by hand, unless you have a titanium wrist-hand.
I improvise with an old jack I find in a catche. This helped, but the tyre iron from the Wolverine’s breakdown kit was even better (not shown). 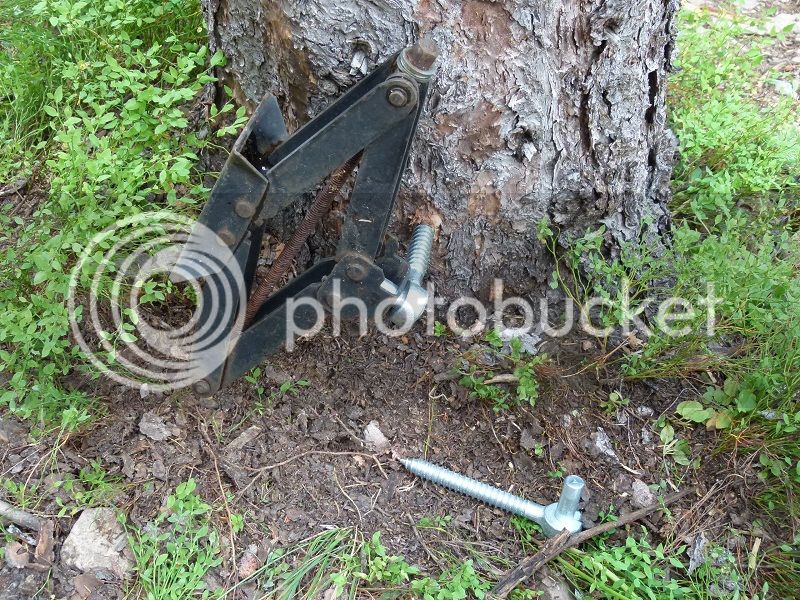 ​
For getting the entire frame lifted onto the lower hinge Mountain Mike helped me.
Here’s the procedure, it may be a bit of quirky way but this how we did it.

1. Lower hinge in, lift up gate frame onto it. Level it up and mark where the upper hinge is to go in.
2. Remove frame from lower hinge and screw in second upper hinge.

At the end of stage one the clunking gate frame was frustratingly awkward to manipulate. Not surprisingly as it’s big hefty logs.
MMM lost his cool and the Mountain Rage briefly flared.
It wasn’t directed at me, but one of the other gate frames. Mike picked up a cinder block we’d been using as a support and hurled it at the frame.
CLONK! It bounced off the chunky wood with barely a mark on it! Now I know the gate frames are made of stern stuff!

After I’d got the second hinge bolt in we hung it up and it was nearly perfect! Mostly balanced and the spruce tree didn’t move a hair! 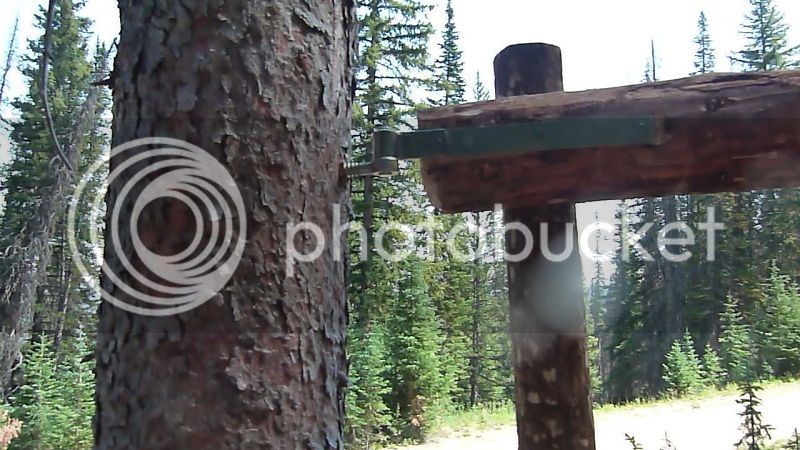 I used this grease on the hinges, not exactly axle grease but I’m sure this lithium stuff is the real deal. 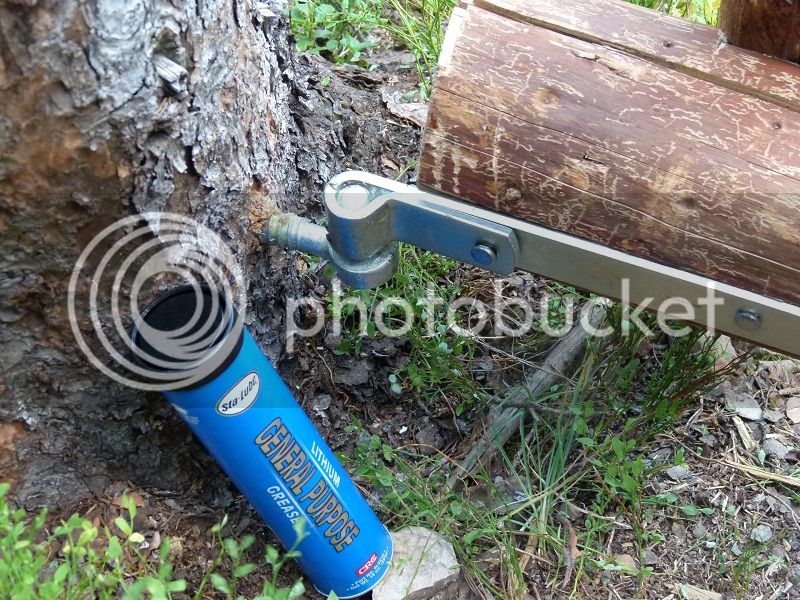 ​
That was enough gatework for one day, the challenge of the second gateframe awaited us the next morning though.
The concrete footing for the post had had about 4 days to set and I set about screwing in the first bolt hanger.
Being the lower one I’d concentrated so much on being exactly lined up with the spruce hinge bolts I made a small blunder.
For the jack tool or even tyre iron I’d used previously for tightening it in had minimal clearance for rotating. It was so low to the ground even digging out a path only got us so far. By the time the screw bolt had gotten in so far the concrete base was in the way and there was no way I could damage that. Besides which the force required to turn the bolt in once it was over half-way into the post was gruelling.
MMM came over, took a moment then went to his tuff shed den.
He came back with a tiny socket set.
I used the tyre iron as a cheater bar onto the small socket wrench for the upper arc bit yet for the lower radius I had no way of turning it.
“It’s not going to be easy to get that to turn Mike.” I said, the screw bolt had to go in further, there was no way it could take the weight being so far out of the post
Yet MMM with some raging power I can hardly fathom seized the socket wrench resting in place and said.
“I don’t do things easy!” He said the words as man and socket melded for a brief moment of shear violent titanic struggle against wood and zinc-steel hinge bolt!
Sure enough MMM overcame the laws of physics and the screw bolt went in just enough.
We got the gate frame hung up, this time my guestimate of the upper hinge was off a bit, but with big washers I’d get it aligned better later.

After the epic struggle was over MMM went into mini-hibernation for an hour or two, I set about getting some planking and green metal sheets to wall over the gateway. 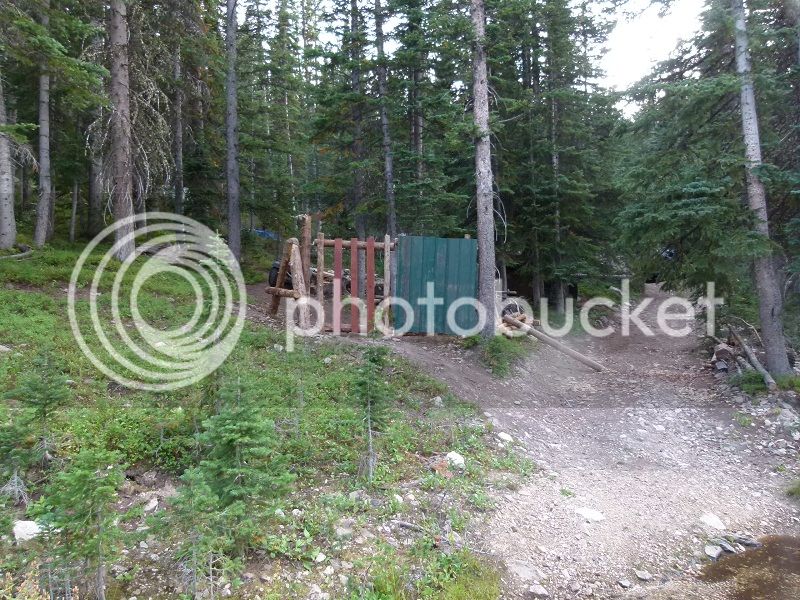 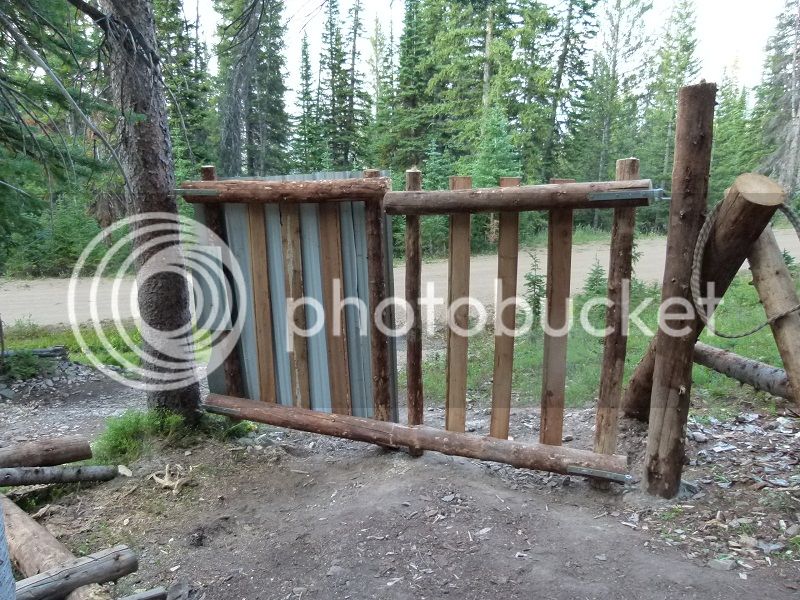 ​
No gateway is complete without a method of locking it.
Taking inspiration from our olde ancestors I stormed up a plan.
Taking a 4x6 length I used my trusty wood chisel to make two ‘U’ shaped cut-outs. Then with MMM’s help I had it chainsawed in two. Making a pair of beefy brackets that any town gateway would be pleased to see.
That was the easy bit, getting it spiked onto the gate was a feat. 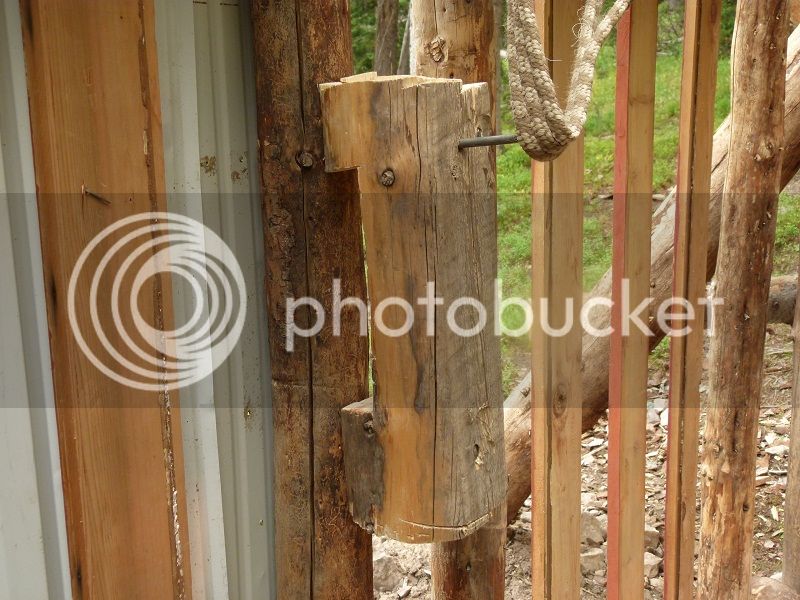