Anyway, work's boring, and the traveling is work-related (I was away from home for three months straight last year and they tried to do it to me again at the beginning of this year), so that's not much better, though I did have a (company-provided) hotel on the beach during the week I was shipped to the Outer Banks. I know, right?

Anyway, Easy Tactical has basically gone off the rails. We're up to twelve members and eight of us are routinely active at events. I've been able to promote two of my guys to the position of team leader, and another donated an old Jimmy for us to turn into a gun truck. We're basically going to cut the roof open and install a minigun turret.

Using an airsoft minigun, of course.

Anyway, a couple of weeks ago, we were back at Blue Hole doing a series of games basically akin to Battlefield's "Rush" mode. The admins set a marker at a CP along the road and we had to move up, take, and hold the position. Each objective lasted fifteen minutes, and the last team to basically get their mitts on the flag won the round, even if they rushed in and touched it at the last second. That CP would then become their spawn point, the other team would retreat down the road to the next CP, and the CP that served as the losing team's spawn point would become the next objective.

We steamrolled those [NICE PEOPLE].

The first objective was a real [UNICORN]-show. Our team started out in the shadow of a twenty-five foot bluff, and there was nothing but open field to the left and steep hill/cliff face to the right. The road was open, no cover whatsoever, and the first CP was smack dab in the middle of it, at the top of a hill. I estimate it was about a hundred, hundred and fifty feet to the top of the hill, which was almost level with the top of the bluff, so twenty-five feet above our position. Half of our team flanked back and to the right, following the road up the hill, but we suspect that the guy who led that particular flank tried to maneuver too far around and became utterly useless. The rest of us had to try and move through open terrain with nothing but tall grass to cover us, and the enemy had already moved up to the CP by the time we really got moving.

It was a slaughterhouse. The grass, it turns out, was growing in some seriously suck-y mud. Moving through that [POO] was utter [MAGIC]. Each step felt like it was going to plunge you waist-deep into the earth, but we managed to get someone with some range up to the front, and he managed to suppress the guys at the CP long enough for us to move across the mud fields and climb another steep hill at the far left side of the AO.

I ended up losing sight of Stick and Grizz, but Zach, Bolt, and I managed to get to the top of the hill. The field is an old quarry, so what you basically have is a large sand pile with deep, wide grooves at the top where insanely big machines have been moving around. We were moving along what basically amounted to a wide, shallow trench, taking cover behind piles of sand and dirt, engaging enemies at close range. We finally got to a point where we could see and engage enemies moving through the thick brush on the hillside, and guide the snipers and riflemen moving up on the CP. We gained it during the last two minutes of the game, after pushing back an enemy charge on our trench, and the enemy forces pulled back to defend the next CP.

At the top of the hill beyond the trenches, we encountered enemies dug into open pine forest, basically large trees clear of low-lying brush or foliage, so we could see them moving clearly enough. A couple of us lit them up with suppressing fire while Bolt, Bussell, and a couple others flanked left and took them on from a position with less cover. We managed to move up to the treeline while our right flank finally closed in and took out the enemies guarding the CP on the road. Fortunately, we managed to close in and get our own defensive line set up before the right flank disappeared again, and we managed to move up.

The next CP was a bit of a challenge. The defenders managed to move some cover around and set up a PKM nest. Ordinarily, support weapons aren't too bad, they're just heavier versions of the AEGs we all know and love... but this one was a beast. Anyone moving up the road got ripped to shreds at 200 feet. Our right flank was still off doing lord knows what, so I sent Stick and Grizz to set up in the trees to our right and guard against movement from that direction and sent a couple randos around the left flank, which, unfortunately, was a wide open space, except for a few natural trenches and ravines.

The PKM crew managed to hold the CP for the entire fifteen minutes, and we moved back to defend the old one. Fortunately, we were able to push them back again, and this time, I took six guys and moved around the left flank to wipe out the PKM nest. We had a bit of trouble when an argument started up about whether or not we could go as far as the creek at the bottom of the hill, but I took care of that by getting an admin to clarify the boundaries. It still ate up most of our time, but we got Wardaddy (Easy's own sniper) and Bussell to suppress the MG crew while PeeDee, Zach, Bolt, and I moved down into the creek.

Our progress was hindered when Bolt managed to sink up to his knees in some mud, but we got him out without much of a problem. PeeDee and Zach moved toward the back of the PKM, Bolt and I managed to get into one of the natural trenches just as we started taking fire from the top of the hill. I returned fire while Bolt moved forward, and we managed to score a hit and a brief period to move freely. We scrambled up the hill, from hole to hole, taking fire and returning it, until the admin began counting down the last thirty seconds. We crested the hill and found that PeeDee and Wardaddy had managed to silence the PKM, but we were too late to grab the marker and gain the CP.

After lunch, we moved to a different part of the field, but our movement was more restricted and we only managed to go back and forth between two points while our forces dwindled as people started to go home. The game was finally called while Stick, Grizz, and I sat in a pine thicket on the side of a hill, trying to determine how we were going to cover fifty feet of open ground with that [LOVE]ing PKM trained on it.

The couple of games after that were just skirmishes where we practiced moving and working together. We're slowly but surely getting everything down, and I can honestly say that I wouldn't trade the guys under my command for the world.

As always, I'm the fat one in the middle. You can see the open ground we had to cover behind us, and the sandy beach-looking bit in the background is actually about a thirty foot climb. From left to right, you've got Grizz (rocking his team patch like a boss), Stick (also rocking that patch), myself (failing to rock my own patch like a loser), Wardaddy (who was a new recruit at the time and didn't have a patch to rock), and Zach (also a recruit, no patch) 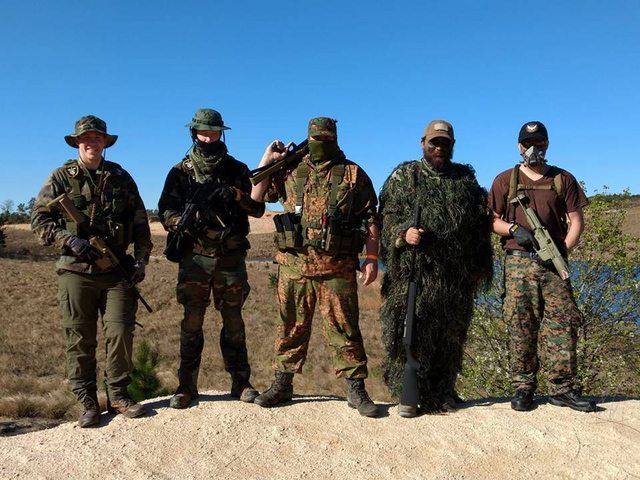