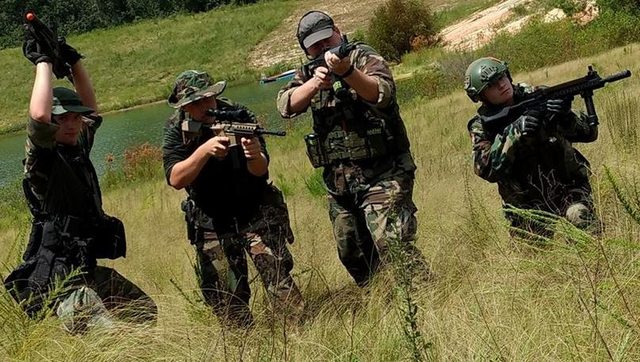 Easy made the trip down to Blue Hole for the skirmishes today. The field owner recently re-opened a brutal area called Patton Hill, a large, well, hill that's easily the highest point in the surrounding area, rising easily 120 feet above the rest of the AO. The sides of the hill are sheer and sort of tendril out, forming deep ravines, and the hill itself curves around a deep valley in the center. It's formidable terrain, and an errant step can end in an unpleasant drop.

I'll be sure to include pictures next time I go out there, even Google's satellite map doesn't do it justice.

We were supporting Alpha faction (green-based camo and balancers) during the day game. The admins had volunteers with pickup trucks cart us the three quarters of a mile from the parking lot to the base of the hill, then we climbed to our respawn point. Bravo faction (tan-based camo) had to walk to the other side of the summit, but they had an easy job during the first round, all they had to do was defend a flag. It was our job to capture it.

The summit of the hill is basically bare sandstone interspersed with copses of pine trees. It's not ideal for an attack, so while the rest of our faction charged headlong into the fight, we made the mistake of trying to flank through one of the ravines.

It turns out that a twenty-foot deep ravine with sheer sandy walls is a real [BONANZA] to climb out of. If you've seen pictures of me around the forums, then you know that I'm not built for that kind of [POTTY MOUTH!]. I mean, [UNICORNS]. We made it down okay and followed the ravine until it was apparent that it wasn't going to end anytime soon. Stickbug took point and led us up the side of the ravine. Again, I'm not built for that. I struggled all the way up, my lungs screaming and my heart threatening to tear itself out of my chest, only to find that, once we'd reached the top, we had another twenty foot deep ravine to navigate.

I don't know how I made it out of there alive, I really don't, but I got back to the spawn point and ran radios for my guys until the round ended... not that they needed it. Our faction wasn't communicating at all. We ended up losing simply because the summit is too hard to attack, too easy to defend.

During the second round, Alpha was responsible for guarding the flag. I was still winded, but not quite thinking I was going to die anymore. I decided to take it easy and laid up in a copse of pine trees, where I'd have shade and a decent line of sight on the flag. Lucky had my back, a random kid was watching for anyone to try and sneak up the side of the mountain (yeah right, haha), and Stickbug and Grizzly had moved off to defend a narrow point on the summit's curve, where a land bridge connected the enemy spawn to our section of the hill.

I didn't fire a single shot the whole time, simply because nobody got close enough to the flag to warrant it. I didn't get spotted, either, which was good, but I did get lit up near the end, when the enemy decided to saturate the copse my guys and I were hiding in with fire. It was a stroke of luck, they hadn't spotted me, they were just randomly firing to try and hit someone, and they managed to get a round into my [HINEY]. Shortly after that, the admin called the game and we headed to the parking lot for lunch. 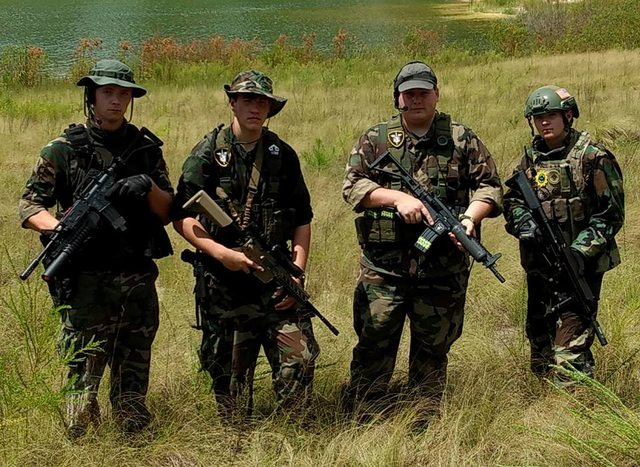 The area where this picture was taken is deceptively flat, perhaps the only flat area in the entire AO, and it still slopes into the pond behind us!

After lunch, they brought out a vehicle, a white Jeep Wrangler with a camo net draped over it and a machine gun mounted on the rollbar. Most of Alpha had left during lunch, so we were divvied up almost evenly. The team without the Jeep got less people simply because they were up against a motorized monster (the gunner in the Jeep couldn't be killed by normal means) and needed the advantage.

Our goal was to capture a small building out in the middle of a small patch of woods. We marched through the AO, down into the valley, and took the objective nearly without a fight. Lucky stayed with the main group, I followed Dom and Lindsey into a flanking position, and we moved into the heavy pine forest that covered the slope on our right. These were small pines, part of a reclamation project on the owner's part, and they hid us well. Unfortunately, they were also so thick that we couldn't see anything happening around us.

We moved up on the flank, crossed open ground on the rear side (luckily, without being spotted by the enemy), circled around and started moving back toward the objective on the lefthand side. We got into a position not far from the Jeep, took out the players surrounding it, and got down so that the gunner wouldn't spot us. After a moment or so, Dom turned to us and whispered:

"Can either of you throw real well?"

Lindsey and I both answered in the negative. Instead, we ended up running out to distract the gunner, and Dom ran forward and managed to get a grenade under the Jeep, disabling it. We found out that we'd chosen a good moment to do so, as the gunner was having trouble with the gun.

That taken care of, we moved back around to the objective, only to find that it had been taken by the enemy. They wiped us out, and I don't think we managed to get near it the rest of the match. I ended up leaving early because I'd overexerted myself early in the day and was starting to feel it later.

Despite my negative experience at Patton Hill, I still think that Blue Hole is one of the best AOs the state has to offer, and I'm looking forward to playing there again, preferably when it's neither as hot nor as humid as it was today.

I was also impressed with Easy's improvement today. As I stated in my last blog entry, I'd just released a comms handbook for our internal use, and the guys followed proper radio procedure for most of the day. We're also getting better at moving together, working together, and keeping our [STUFF] together. [MUFFINS] fine work, if I do say so, myself.
Share:
Facebook Twitter Reddit Pinterest WhatsApp Email Share Link

Two quick notes:
If you're "over-exerting" yourself, try to carb-load the night before (ie pasta). And I don't see any canteens on your gear. Do you use bladders?
And I still like the old Woodland Cammo, but where you're at looks more suited to tiger-stripe.